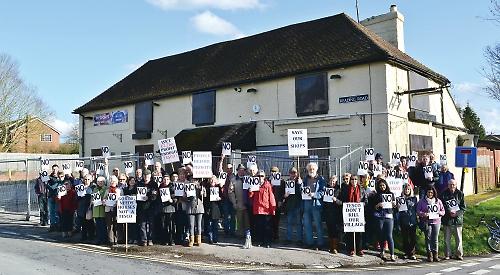 A NEW branch of Tesco will open in Goring this year.

Contractors for the retail giant, which bought the former Queen’s Arms pub in Reading Road in 2013, have begun converting the premises into an Express convenience store.

The shop floor will be extended to 2,830 sq ft, an increase of about 40 per cent, and the store will also have a service yard, a chiller storage area to the rear and 14 car parking places.

It will be open daily from 7am to 11pm and will create the equivalent of about 20 full-time jobs.

Tesco is yet to confirm an opening date but says it should be up and running before the autumn.

The company was granted planning permission in July despite objections from the parish council and more than 150 residents who said the location was unsuitable.

Opponents claimed it would increase the risk of an accident at the junction of Reading Road and Wallingford Road because there wouldn’t be enough room on the site for delivery lorries and they would park on the street, creating a blind spot. They also said there was a greater risk of pedestrians being hit as they crossed Wallingford Road or Gatehampton Road, where the pavement is less than a metre wide in places, to reach the store.

There were also objections from independent business owners who said a Tesco Express would threaten their livelihoods.

But South Oxfordshire District Council’s planning committee approved the application, saying it would boost trade in Goring and discourage car journeys to other villages.

Oxfordshire County Council, the highways authority, did not believe the development would cause a safety hazard.

Stop Tesco in Goring, a residents’ group set up to fight the proposal, is no longer active but former members say they will campaign for extra safety measures.

Tesco is building a simple dropped-kerb crossing in Gatehampton Road but residents believe this is not enough. They will also be monitoring the store to ensure it complies with planning conditions imposed by the district council.

To prevent congestion, Tesco must not let delivery lorries pass through Goring high street, nor may they visit the store between 7.30am and 9.30am and 4.30pm and 6.30pm, when the junction is busiest.

Tom Worthington, of Lockstile Way, Goring said: “To a large extent, people accept that it’s happening but there is still active pressure to make Tesco comprehend that it’s an unsafe location. There was almost a crash at the junction the other day. A skip lorry was parked on the corner because it couldn’t get on the site and as one car was going around it, it nearly went head-on into another car coming the other way.

“The visibility was hugely reduced and that sort of thing is going to keep happening. When the store opens, there will doubtless be considerable monitoring to ensure Tesco doesn’t breach its conditions.”

Kevin Bulmer, chairman of the parish council, said: “There’s clearly nothing more we can do about Tesco but I’m sure the council will be watching to make sure everything is done properly.”

Tesco says it will use smaller, rigid vans to deliver to Goring rather than articulated lorries so vehicles will not park on the road.

A spokeswoman said: “We have recently started work on site and we’re really excited to be opening our new Reading Road store at the end of summer.

“As well as providing a great range of products, we’ll also be looking to make a valuable contribution to the local community.”

When the Goring Gap Business Network conducted a survey in 2014, 169 out of 298 respondents, or 57 per cent, were against Tesco while 118 were in favour and the rest were undecided.