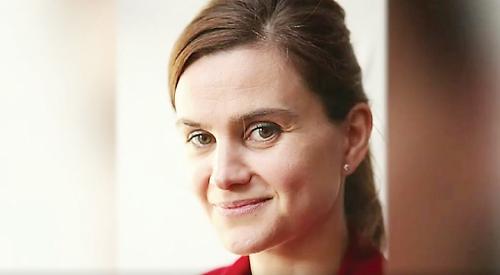 FRIENDS of the murdered MP Jo Cox want to stage a community event in her memory in Benson.

Adrian Lovett, who knew Mrs Cox for about 15 years, and his wife Steph plan to hold a community picnic or barbecue on June 18.

The couple, who live in Brook Street with their daughter Ellis, 15, and son Harry, 14, have received the support of Benson Parish Council.

Mrs Cox, a Labour MP and mother-of-two, was shot and stabbed to death in Birstall, West Yorkshire, where she had been due to hold a constituency surgery, on June 16 last year.

Five months later, Thomas Mair was jailed for life after being found guilty of her murder.

Mrs Cox had been head of policy at Oxfam when she met Mr Lovett and she chaired the all-party parliamentary group Friends of Syria.

Mr Lovett, 47, said: “For some of us who knew Jo this is a nice way to remember her and I think she would be proud of it.

“But for all of us it’s living the way she lived, which is to be open to everybody and to enjoy the fact that we’re different but also we have a lot in common.

“What [her husband] Brendan has asked everyone to do this year is to bring people together, not just to remember Jo, but to live in the way she tried to live.

“The core idea is we all have more in common with each other than that which divides us. There’s a lot of positive energy surrounding Jo’s memory that her friends and family want to channel.

“The whole point is actually about our neighbourhoods and our neighbours so I thought ‘let’s do something in Benson’. That’s where we’ve lived for the last seven years and it’s a great place. There’s a lot of great people here but we probably don’t see enough of them.

“This is a great chance to get together, get to know each other more, have some fun and enjoy some food together and perhaps we’ll be a little closer as a result.

“Maybe if there’s enthusiasm for it we can get some music and dance groups in Benson involved.”

Mr Lovett, who is the interim chief executive of One, an international campaigning and advocacy organisation, became friends with Mrs Cox when they worked together at Oxfam in the early 2000s. He said: “She was head of the policy team when I was head of the campaign team. She was incredibly warm from the first time I knew her.

“She was small but wore very high heels. My wife said ‘she’s about five inches taller than her actual height because of those fabulous heels!’

“When she got married me and my wife and kids went along to the wedding. She and Brendan were family friends.

“I last saw her about February or March last year. I popped into the House of Commons and we had a cup of tea and a slice of cake in the canteen.

“Obviously you never know the significance of these occasions until something terrible happens. We had that lovely hour or so and then in June we got that awful news.

“Jo was facing quite a lot of tough stuff in terms of people not liking what she was doing with Syrian refugees and so on but she was incredibly positive.

“I remember her going off to Darfur for Oxfam in about 2006 and taking David Cameron before he was Prime Minister and Andrew Mitchell to show them what was going on. It was when things were really desperate in that part of the world.

“It was clear she was determined to make sure they saw the reality on the ground that she had seen in many other places but was particularly tough at that time in Darfur.

“She came back with a real sense of pride that she had been able to do something which very few could do — show people who have political power the difference they can make by their decisions. I  saw David Cameron a few weeks ago and he was reflecting on that same trip and remembered it and Jo well.”

Mr Lovett has not found a venue for the community day.

He said: “What we need to do in the next few weeks is have a little meeting and get everyone together who might be interested in helping and see what ideas people have. Although Steph and I knew Jo, this is really not just about her. It is about all of us and how we can celebrate and make new friendships and build the community.”