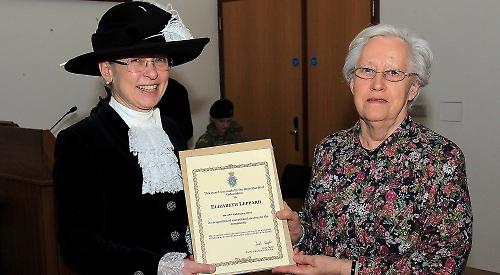 A WOMAN from Benson has been honoured for more than 50 years of exceptional service to the community.

Elizabeth Leppard, 76, was presented with the High Sheriff of Oxfordshire’s award for her voluntary work in the village.

She has helped raised thousands of pounds for organisations and facilities including the tennis club, the pavilion, the parish hall, Mill Stream Day Centre and the Friends of Benson Library.

She is currently the co-ordinator of the Benson Volunteer Helpline, which helps transport people to hospital, GP and optician appointments.

Mrs Leppard, who lives in High Street, Benson, was one of 23 people to be presented with the award and a certificate by the High Sheriff Sarah Taylor at a ceremony at the Blue Boar Lecture Theatre at Christ Church College, Oxford.

Her citation said she had made a “profound impact on the lives of many elderly citizens locally, improving their quality of life” and had “given selflessly to her community”.

Mrs Leppard said: “It was quite overwhelming to be perfectly honest with you but I was delighted.

“My husband Ian and I have been doing it together so I don’t know why they singled me out.

“We have been fund-raising for this village virtually ever since we arrived, which was in 1964.

“We have always been doing something. If we didn’t enjoy it, we wouldn’t do it.

“The community has helped us because our kitchen is full of stuff just waiting to go to a car boot sale. We couldn’t have done it without the village behind us.” The couple have raised about £30,000 for the day centre over the years and in the Eighties ran a horse show to help raise funds.

Last year they raised £3,500 for the village library and they are fund-
raising for it again this year.

Mrs Leppard served as parish clerk for 18 years and was a parish councillor for four.

She was nominated for the award by the council’s current chairwoman Pat Peers.

Councillor Peers said: “Elizabeth has worked so hard in this village for years and has never been recognised.

“She goes about all her work quietly and I felt she deserved an award. She helps anybody in the village regardless.

“I can recall working with her in 1980 selling cups of tea in the street to raise money for the day centre.

“She has worked religiously with the day centre, alongside her husband Ian. They have organised car boot sales and book sales for the centre.

“Without these volunteers we wouldn’t have our library or our day centre as it’s volunteers that keep these things going. They really are the backbone of the village community.”

“Hearing the citations read out just brought home what extraordinary people I was celebrating with — truly humbling.

“They were all touchingly thrilled to be given the award and it was great fun chatting to them all over drinks afterwards in the lovely setting of the deanery.

“Our county is blessed to have so many amazing people living in it.”

Nominations were made by teams and individuals wanting to honour those who largely operate under the radar for their tireless efforts and dedication.