Paul was very noisy - it's hard getting used to quiet 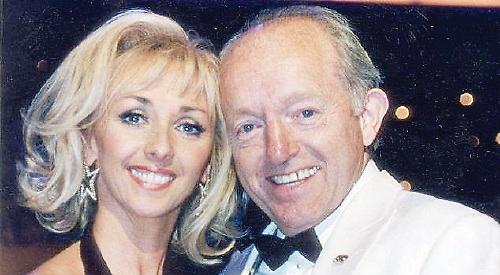 THE widow of Paul Daniels says she still isn’t used to how quiet the house is a year after his death.

Debbie McGee, who was married to the magician for 28 years, said she still had “dark times” but had been helped by keeping busy.

Daniels, 77, who lived with his wife in Wargrave, died at home on March 17 last year, two months after being diagnosed with an inoperable brain tumour.

McGee, 58, said: “In the last month coming up to the year anniversary I’ve really struggled but luckily I’ve been so busy that it takes you out of it.

“I’ve not been able to do much in the magic world, as that’s when the emotion hits me, but I’ve kept myself busy with work, which keeps me focused during the dark times.

“Work has kept me going and I’m very lucky that my family, Paul’s family and his sons are very close.

“He didn’t suffer, it was very quick so when I’m feeling at my worst and really missing him that’s what I think about.

“Every day you hear or see of people with sad lives or unhappy marriages and I can’t feel sorry for myself because I remember how good it was with Paul.”

The couple moved to Willow Lane in 1998 and McGee said her husband was always busy doing something.

She said: “He was very noisy in the house — every two minutes he’d be asking me to come and look at something or tell a joke. That’s what’s hard to get used to and I haven’t got used to it yet. I’m not sure I ever will.

“When we were out and about he used to speak to everybody and you miss him making people laugh.”

McGee said she had been overwhelmed by the messages of support she had received since Daniels’ death, including many from people in Wargrave.

The couple were well known in the village and made dozens of appearances at charity events free of charge over the years.

Daniels helped with the annual village pantomime and performed at the Wargrave Village Festival, raising at least £12,000 for the Royal National Lifeboat Institution.

McGee said: “I’ve had so much support. I popped in and had coffee with someone in the village recently and they were all amazing.

“When Paul was ill I used to open the front door and friends in the village or our lane would have left cooked dinners with instructions and a note.

“When you are caring for someone you don’t have the energy to see people or cook. They were amazing, real lifesavers.

“Wherever I go in the country, but particularly Wargrave and Henley, people stop and talk about Paul.

“I always knew people liked him and he loved people but I was shocked and overwhelmed when he died at the amount of media coverage and the love from people who wrote to me.

“Women would come up to me and hug me, saying nothing, or say lovely things about Paul.

“People around Wargrave all have their own little stories about how he affected them in a positive way.”

Tributes to Daniels also poured in from the magic community, with famous entertainers from around the world passing on their condolences.

These included American duo Penn and Teller, who invited McGee to meet them during the London leg of their forthcoming UK tour.

McGee said: “Teller was on the phone immediately asking if they could do anything and sent me a lovely message. I had a lot of letters from people who said they took up magic because of Paul.

“He was a legend of the magic world when he was alive but what’s been amazing since he died is what all the magicians around the world have said about him. They’ve all be in contact.”

McGee said she had been trying to raise more awareness of brain tumours and has started working with the charity Brain Tumour Research.

A fund-raising page set up by the family after Daniels was diagnosed raised more than £7,000 and McGee has since designed a special badge in the shape of a rabbit in a hat to be sold to raise more funds.

The pin badge, which she helped to design, is available on eBay with a suggested donation of £5. She said: “We got to know the people who run the charity, learnt more about tumours and found out that they get a very small percentage of funding compared with other cancer charities.

“I’ve done quite a few things through the year but it’s quite an emotional wrench.”

McGee was attending a meeting at the House of Commons this week to try to help Brain Tumour Research get more government funding.

She said: “It’s about people who have found something positive to help them through it, which is what I’ve been doing this year.

“It’s for people who can’t cope with the grief and to say there’s a way to get through it and help them.”