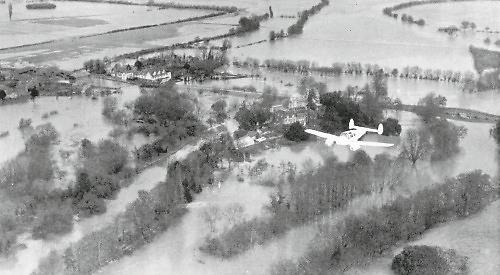 AS winter turns to spring, we are basking in a welcome spell of warm and dry weather.

But things weren’t quite so pleasant 70 years ago, when towns and villages along the River Thames were struck by the worst floods in living memory.

On Friday, March 14, 1947, the river rose 15 inches overnight and did not subside for more than a week. Two days later, rescue and relief efforts were further hampered by heavy storms which uprooted trees.

According to the Henley Standard, both sections of Thames Side were closed to traffic because they had become impassable while low-lying shops and houses were flooded by several inches of water.

Properties in Wargrave Road, on the opposite bank, were similarly affected as the street was plunged under 3ft of water in places. The Two Brewers pub, which closed in 2002, could only be reached by raised gangplanks.

There was also heavy flooding along Remenham Lane and parts of the road between Henley and Caversham, with about 10in of water near the Flowing Spring pub at Playhatch.

Mr J J Tame, the keeper at Marsh Lock in Henley, delivered parcels to affected homes in White Hill, Wargrave and Crazies Hill by rowing a dinghy attached to a safety rope. Henley policeman F Haynes made similar journeys to houses at the end of Mill Lane.

On March 18, with the floods still raging, the police joined forces with the army and firefighters to evacuate Mill Lane residents using a Sherman Mark III tank based at Slough. The operation took four hours.

The tank, which was equipped with a pump, drove through 5ft of water but halfway through it was overwhelmed and broke down after the clutch seized. A second was summoned but this also broke down.

Finally, a third tank was called in and the residents were rescued using dinghies, ladders and planks as makeshift bridges.

One evacuee, a Mrs Bagueley, remarked: “Well, I never thought I should have a ride on a tank.” Pte Reginald Jackson, from Chazey Heath, was thrown into the water when the dinghy collapsed but was pulled to safety.

During the week, police also used an amphibious landing craft to rescue a Colonel and Mrs Lane from a motor cruiser moored off Rod Eyot and a pregnant mother from a marooned house at Medmenham.

About 1,600 homes in Caversham were flooded, of which almost 200 were evacuated.

Gosbrook Road and surrounding streets were completely submerged and many residents resorted to travelling by punt or rowing boat.

Five Caversham schools closed for the week and many people could not use their telephones. An emergency cable was set up along Caversham Bridge, allowing 40 per cent of the usual volume of calls to be handled.

Shopkeepers reported shortages as they could not take new deliveries and an emergency refuge was set up at the former Battle Hospital in Tilehurst. Free meals were handed out at the former British Restaurant in Kings Road, Reading. According to an official history of the event, which was produced later that year, “it looked as if Caversham might be completely cut off from Reading”. The Mayor launched a distress fund which raised £12,000.

Meanwhile, the gale on Sunday, March 16 reached speeds of up to 70mph and an RAF officer travelling by motorcycle between Nuffield and Crowmarsh Gifford was killed when 19 trees were blown over.

Trees were also uprooted in Reading Road and Marlow Road, Henley, and on the Friar Park estate.

The record was set in 1894, when the water reached 6ft 8in at Goring, 5ft 6in at Whitchurch and more than 4ft at surrounding locks. During those floods, islands on the Thames at Caversham were submerged, so only the tops of trees were visible.

My thanks to Roger Lightfoot, from Caversham, for the loan of the Reading Council floods booklet.