Apprentice winner to stand for Tories in by-election 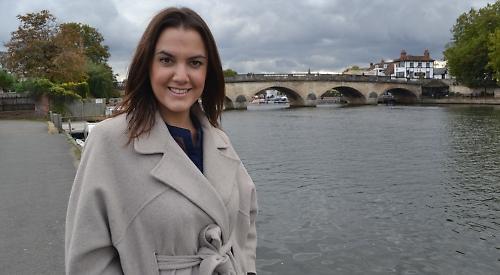 A FORMER winner of The Apprentice will run for election to Henley Town Council.

Yasmina Siadatan was officially selected as the Conservative candidate to contest the south ward seat vacated by Councillor Martin Akerhurst, who stood down due to health concerns last week.

She was announced following a unanimous vote by party members at a meeting at the town hall on Thursday.

A by-election for the seat is likely to be held on May 4 to coincide with another one that has been called following the resignation of another Conservative councillor, Dylan Thomas, last month for work reasons.

She now lives in Harpsden Road, Henley, with her two sons Rupert and Roman, six and four, who go to Trinity Primary School in Vicarage Road.

She said: “I’m absolutely honoured to be selected but now the hard work starts.

“I’m going to spend the next six weeks talking to as many residents as possible from the south ward, understand their issues and formulate some brilliant solutions.

“I’ve already got some ideas up my sleeve based on issues like pollution and chiodlren’s serfvices.

“When I was dropping my children off at school this morning the teachers and a couple of mums came over and I was able to ask them.

“It’s interesting to have those conversations with your friends becayse you normally talk about the weather!”

“I’m a huge fan of Henley,” she added. “I moved here two years ago and I’ve lived in the vicinity since I was five.

“My children are at primary school and I want them to stay here for secondary so I want to get involved with the community.

“I have a huge love for the town and want to make it a better place for us to live.

“When I moved here I read the newspaper and saw the good work the council was doing. I thought it would be great if I could contribute.

“I have experience with business and running projects and they could do with my skill set.”

Ms Siadatan met several councillors and attended meetings and council events before telling the Henley Conservatives that she would like to be considered if any vacancies arose.

She is especially interested in children’s services, affordable housing, independent businesses and reducing traffic in the town.

Ms Siadatan said: “I’ve been going to all the committees, listening to how it all works and how the council is run. I’ve been getting to grips with the processes because this is my first foray into politics and it’s a learning curve.

“I find anything to do with the community fascinating. With my background I have a long history of starting businesses with a business plan.

“What happens at council is that councillors listen to residents, ask what their needs are and then go away and come up with what is effectively a business plan.

“They then vote on that plan and see it out. I’ve been through that process hundreds of times in my professional career.”

Ms Siadatan was born in Hull and was one of six children. Her father ran restaurants in the North before the family moved to Los Angeles.

The family returned to England when she was five, settling in Caversham Heights, where she attended St Anne’s Primary School and later Kendrick School in Reading, a girls’ grammar.

After graduating from the London School of Economics in 2004, she went travelling before opening the Mya Lacarte restaurant in Prospect Street, Caversham, with her older brother Matthew.

After winning The Apprentice, Ms Siadatan worked for Lord Sugar’s company Amscreen but left after just a few months when she found out she was pregnant.

She moved to Sonning in 2010 with her partner Andrew Hepburn, who works in technology, and had her second son before moving to Henley in 2015.

He had attended meetings sporadically due to health problems in the last two years and faced calls from HRG councillors and supporters to give up his seat.

In his resignation letter, Mr Akehurst said: “Following a recent set of investigations and a follow-up with an oncologist, I have been advised to suspend certain activities.

“Due to ongoing health concerns, I am offering my resignation from Henley Town Council as a town councillor.

“I would like to give my thanks to fellow councillors, town hall officers and residents of Henley for their encouragement and support and contacts at both district and county levels during a concerning time.

“I will continue to follow activities in Henley with great interest. We have a good spread of involvement and influence at town, district and county level which will be essential in the months to come.”

Mr Akehurst, who had previously said he had no plans to quit, told the Henley Standard: “My colleagues have been extremely good and, as much as I would like to give it another six months, I think it’s time for me to stand aside and let someone else shoulder the burden.

“It’s not a decision I took lightly — my consultant and I have been looking at the situation for the last two years.”

David Nimmo Smith, leader of the Conservatives on the council, said: “We thank Martin very much for his brilliant year as our mayor and all he did for Henley during his term on the town council.

“Our thoughts continue to be with him and his family and we wish him well.”

Mr Thomas, a former Army intelligence officer, who lives in Northfield End, resigned after securing a senior role in the civil service, which meant he could have no political affiliation.

Former town councillor Joan Bland is standing for the Conservatives in that seat, which is in the Henley North ward.

The Conservatives are the ruling party on the council, holding eight seats, compared with six held by Henley Residents’ Group, which has yet to announce its two candidates.