Treasure from Bronze Age dug up by metal detectorist 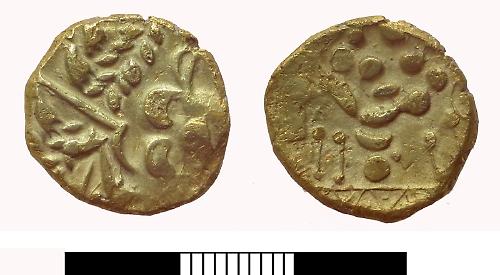 TWO metal detectorists are set to cash in after their finds were declared to be treasure.

They each discovered hoards dating back more than 2,000 years — one in Bix and the other in Checkendon.

At an inquest last week, the Oxfordshire coroner Darren Salter declared both met the criteria to be treasure and they will now be valued by the Government’s treasure committee.

Jon Long was in a field at Bix in October when he unearthed a collection of more than 50 items, including a decorative razor, a decorated bracelet and a dagger from the Bronze Age, meaning they date back to 1400 to 1200BC.

They were buried in a bucket urn in a small pit but the base of this had been destroyed by a plough. Most of the items were found within 10m of the bucket.

Mr Long, from Reading, contacted Anni Byard, the British Museum’s finds liaison officer for Oxfordshire, after finding the first few items as he suspected there were more.

The hoard is from the ornament horizon period, when there was an increase in the wearing of bronze and gold personal ornaments such as rings, bracelets, pins and torcs, a one-piece stiff necklace.

Mr Long, who has been metal detecting for five years, said he chose to go to Bix as he had a few hours to spare and he could get permission from the owner of the field.

He said his detector started making a “significant” sound when he found the bracelet.

He then sent a photograph of it to his friend and fellow metal detectorist James Mather, who had found a hoard in Watlington.

Mr Long said: “He got back to me, saying he thought it might be from the Bronze Age so I went back over the area. I pulled out a small dagger as well, so I thought it could be hoard and contacted Anni.

“I went back the following Sunday with Jim and we went all over the area. We dug a hole and found the pot of items. I could not believe it. It’s the fact that no one has touched or seen these items for thousands of years.

“It was an amazing experience to find something of this significance for Oxfordshire.”

Mr Long, whose last significant find was a medieval hoard in Pangbourne in 2014, said he was not concerned with the value of the Bix hoard.

“The significance of the hoard is what is special for me,” he said. “This is the only middle Bronze Age hoard from Oxfordshire.”

Ms Byard told the inquest: “The detectorist was very responsible once he realised he had found several items.

“He started digging, then called us in and we carried out a controlled excavation and discovered the rest of the hoard.

“It is the first find of the ornamental period in Oxfordshire, so this is quite significant. They are usually found in Wiltshire or Hampshire.”

The bracelet, which weighs almost 160g, is decorated with four rows of chevrons and two panels of parallel lines. The copper razor was decorated on both faces with uneven and unequal panels of chevrons, cross-hatching and diagonal lines.

The pot containing the items was made from flint and clay. It was plain with a rounded rim.

Mr Salter said that as the find was more than 300 years old and contained at least 10 per cent precious metals he was satisfied that it was treasure.

Paul Lycoll, also from Reading, discovered an Iron Age hoard during a series of metal detecting trips to Checkendon in late 2014 and early 2015.

His find included two gold and five silver coins, a copper alloy toggle, copper alloy bridle-bit side link and a harness brooch dating from between 200BC and 100BC.

Both gold coins are staters, a type of ancient Greek coin, with one thought to be from the Gallic war period. Four of the silver coins are drachmas, another type of Greek coin. Two are attributed to the Narbonne area of France and another two from central-west Gaul, a region in central Europe.

The other silver coin is attributed to the then northern Gaul/Armorican border in western France. One side of the coin shows the head of Pallas Athena, the Greek goddess of wisdom, fertility, the useful arts and prudent warfare.

The alloy toggle is thought to be from late in the Iron Age and was a type of moulded decoration widely distributed across southern Britain from 100BC to 100AD.

A similar example to the bridle-bit side link was found in Essex in 2015. It is considered unusual as the central bead appears on the central link rather than the side link.

The brooch is in a U-shape with flaring ends. It is decorated with motifs, including crescent shapes, triangles and waves.

Mr Salter said: “This is an Iron Age hoard found in Checkendon and my conclusion is treasure.”