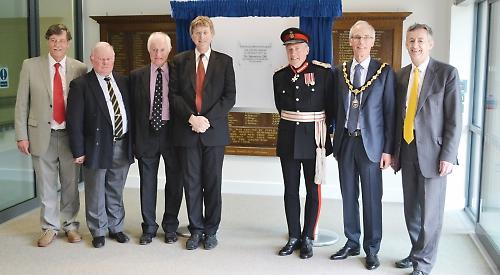 THE new Townlands Memorial Hospital in Henley has been officially opened by the Lord-Lieutenant of Oxfordshire.

Tim Stevenson OBE unveiled a plaque at the rear foyer of the £10 million hospital in York Road on Tuesday following a tour of the facilities.

He was joined by representatives from Henley Town Council, the Townlands Steering Group and the League of Friends of Townlands Hospital as well as various NHS bodies including the Oxfordshire Clinical Commissioning Group and Oxford Health.

Other guests included Mike Willoughby, of the Henley Lest We Forget project, town councillors, local GPs and representatives from Vinci Construction and Amber Solutions for Care, which built the complex. The hospital opened to patients in March last year and the rapid access care unit, which is designed to replace 14 “lost” beds, opened in January.

After drawing the curtains on the plaque, the Lord-Lieutenant said: “I have the privilege of doing all sorts of things as Her Majesty the Queen’s representative in Oxfordshire, but this is the first time I’ve had the privilege of opening a hospital.

“It’s the sort of endeavour she likes to celebrate.

“It’s extraordinarily impressive and the fact that it’s here at all and of the quality it is, is thanks to all the people here today.

“It is a facility which will improve the lots not only of people in Henley but the broader area. It’s a great achievement and a wonderful facility.

“The last thing is to congratulate those who initiated its renaming as the Townlands Memorial Hospital.

“We are opening it 100 years on from that terrible conflict and it will keep alive the memory of the sacrifice that generation made.”

For the ceremony, the plaque was positioned in front of a memorial board from the old hospital with the names of all the local servicemen killed in the First World War but it will now be moved to the front foyer.

David Smith, chief executive of the commissioning group, said: “I first came to Oxfordshire in 2014 and I remember coming down here to meet Henley MP John Howell.

“At that time there was just a great big hole where we are now. To go from that position to here is fantastic and credit goes to everyone who has been involved in the development.

“This is our exemplar model in Oxfordshire. We have provided more facilities than we ever could in the old building and I think it’s fantastic for local people.

“There is still room to do more and there are discussions around the top floor.

“There’s a very long history of healthcare services on this site and we are creating new history going forwards.”

Mr Smith paid tribute to former Henley GP Peter Ashby, who has been a Townlands campaigner for more than 30 years.

He said: “Peter has had a long history with this hospital and is pleased, as we all are, to see this facility here.”

“I’m delighted that the hospital is now fully open and doing what we wanted it to do.

“It’s the end of a long road but there’s still work to be done to make sure the new services settle in and maybe get some new ones.

“I’d like to thank everyone in the community who gave their support, signed our petitions, came with us to Downing Street and joined the march. It really was a community effort.

“All the work for this has shown that we need it. People did listen about preserving a hospital on this site and we’ve ended up with more than we ever dreamed was possible.”

“It’s good to see the bed model working now and the only thing we would now like to see develop is the adult social care.

“The thing that impresses me is that everything gets done in the same place now, there is none of this referral.

“When you are not very well the idea of driving to the centre of a city must alone be enough to make you need medical attention!”

The room was named after a former Henley Round Table chairman who died in a car crash in 1969 and was originally opened at the old hospital in 1972 before being reprovided in the new facility.