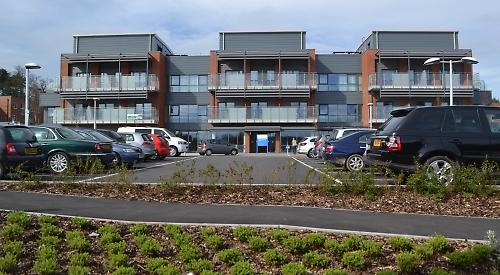 Patients and visitors will need to put their car registration into a touch pad at the hospital’s main reception after parking in one of the 35 patient spaces.

There is also a 20-minute grace period for drivers who are dropping off or collecting people from the hospital, who will not need to enter their car’s details.

The rules will be administered by a specialist company, Smart Parking, and anyone who fails to enter their details or is not authorised to park on the hospital site will receive a £100 penalty, reduced to £60 if paid within 14 days.

The system will take effect on Monday, April 10.

The hospital car park will use different rules to the neighbouring car parks for the Bell and Hart surgeries and Chilterns Court care home, which are also on the campus.

Earlier this month, the surgeries announced that they would also be using number plate recognition for their car park.

Anyone with an appointment can enter their vehicle’s registration details at the reception but will only be given a maximum of 90 minutes of free parking.

There will also be a grace period of 15 minutes for drivers dropping off or picking up other people.

The care home, which is located next to the hospital and is owned by the Orders of St John Care Trust, has 22 parking spaces which will be managed through a “white list” for staff and a touch pad at its reception for visitors.

Visitors to each building will also have to use its own car park, meaning hospital patients will not be able to park in the surgeries’ car park or vice-versa.

At a meeting of the Townlands Stakeholder Reference Group on Tuesday, members said they were worried the different rules would cause confusion for drivers and lead to parking penalties.

Patient representative Vivienne Laurie said: “I’m concerned that there’s going to be a lot of face-to-face confrontation for reception staff at the surgeries and the hospital.”

Janet Waters, a patient representative for the Bell Surgery, said: “The surgeries have gone ahead and given their criteria, which is going to cause problems with the limited spaces. We have to educate people that you can’t cross-park.”

In the past there have been complaints that staff and patients with appointments at the hospital and surgeries are sometimes unable to find a parking space because shoppers are using the car park.

Mark Harrison, of NHS Property Services, said: “We know patients, visitors and staff have experienced significant difficulties in parking on the site at certain times of the day due to some motorists misusing the limited parking there.

“At times, this has meant patients have been forced to park off site and negotiate the steep slope to get to the hospital, which is particularly difficult for those with mobility problems.

“We are committed to making it as easy as possible for patients and visitors to access and use hospital services and hope the new ANPR system will discourage those motorists who should not be using the car park.”