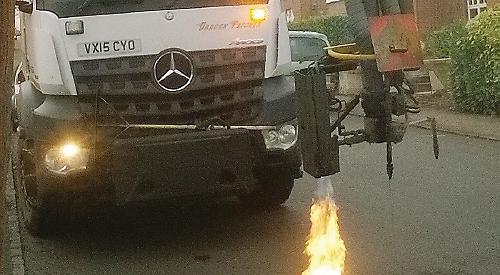 A SECOND “fire-breathing” road repair vehicle has been bought by Oxfordshire County Council.

The original 18-tonne unit, known as a “dragon patcher” because it has an articulated arm that shoots out a jet of flame, spent several hours fixing potholes in Henley last year.

Councillor David Nimmo Smith, the council’s cabinet member for environment, said: “Over the last few months, the dragon patcher highways repairer has been in Henley on three occasions.

“The patcher has been so successful that the council’s highways contractor has purchased a second machine which will arrive in the next month or so.”

Skanska, the contractor, bought the first vehicle in 2015 and has been using it to repair large uneven areas of road where the potholes are still fairly shallow.

The patcher is manned by two people, one of whom operates the machine while the other follows behind it to level out the freshly-laid surface with hand tools.

The arm is connected to a gas supply and fires a hot blast which evaporates water and ice on the road surface, burns off any dirt and melts the tarmac slightly to make it softer and more adhesive.

It then fires a high-pressure stream of hot gravel and bitumen at the ground through a separate nozzle and the second crewman levels it off.

Finally, the vehicle drives over the new surface several times to compact it using two rollers behind its rear wheels.

Meanwhile, a series of road repairs are to be carried out in Henley.

Milton Close will have the surface planed and relaid during the Easter school holidays.

The Henley College will allow its car park be used for the anticipated three days of the work.

The lower end of King’s Road, between Ravenscroft Road and Northfield End, will have the same work done in June.

Councillor Nimmo Smithsaid: “There are a significant number of defects here and repairing the potholes is not the best option.

“Residents, and the wider public, will be notified when the details have been finalised.

“The county is also programming for Harpsden Road to be similarly planed off and relaid but I have no date for this yet.

“I am asking for this to be dealt with in the next financial year as the state of the road is beyond routine patching.”