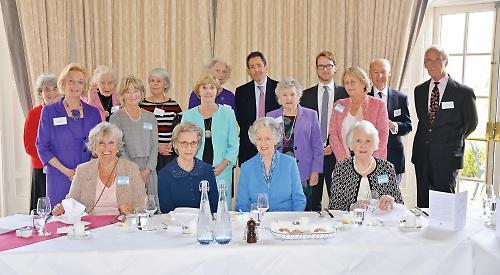 THE Duchess of Gloucester was of honour at a celebration of the Henley Decorative and Fine Arts Society’s 40th anniversary.

She was accompanied by Lord and Lady Camoys, of Stonor Park, at the group’s annual meeting, which took place at Phyllis Court Club in Henley on Wednesday and was attended by more than 100 people.

John Benjamin, an international jewellery expert who regularly appears on the Antiques Roadshow, gave a lecture called “At the sign of the falcon” about the early British silversmith Henry George Murphy.

The stage was decorated with a silk banner created by pupils from Nettlebed Community School. It included an image of the River Thames with a swan, insects and a rowing boat and was designed using a technique called batik, in which the outlines are laid down in wax before they are painted over and removed.

The club’s Finlay Suite was also decorated with photographs capturing the club’s history. After the talk, the royal visitor and Lord and Lady Camoys had lunch with current and former members of the society’s committee, including eight past chairmen.

The Duchess is president of the National Association of Decorative and Fine Arts Societies and June Robinson, the national chairwoman, and Florian Schweizer, the chief executive, were also present.

Anne , the Henley club’s chairwoman, said: “It was successful day. We had a really good turnout and an excellent lecture from John, who shared an absolutely fascinating story.

“We’re very proud that our membership is continuing to increase as we celebrate our 40th anniversary.”

Vice-chairwoman Claire Woods said: “It’s very important for us to show what we do as a society and how wonderful the facilities are at Phyllis Court Club.

“It’s extraordinary that a society such as this, which is run by volunteers, is still going after 40 years and this is an appropriate way to celebrate it.

“It was absolutely amazing to have the Duchess here and we’re truly honoured that she found time for us in her busy schedule.”

The Henley club, which has almost 700 members, is the second largest in the national association.

It organises lectures, study days and trips as well as supporting youth art projects. This year it donated almost £3,000 to the Henley Youth Festival. 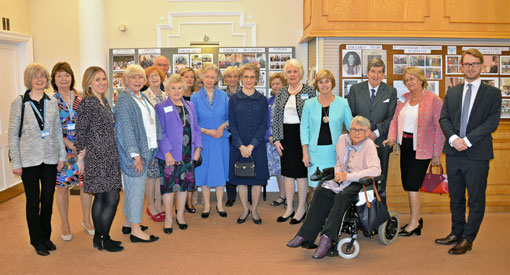