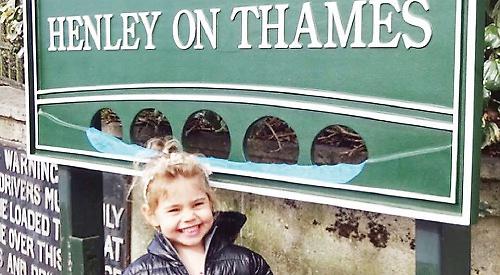 A LITTLE girl from America celebrated her fourth birthday in the town which shares her name.

Henley Schomp is on a worldwide trip with her parents Jake and Michelle and two-year-old brother Jagger.

The family, from Tampa in Florida, stopped off in the town on Sunday en route to London and had brunch at the Chocolate Café in Thames Side.

Michelle said: “When we named her we researched everything to do with Henley to make sure there were no negative connotations.

“We came across this town and always said that we would try to take her there.

“When we arrived Henley was just brilliant and the weather was so beautiful. Everyone was outside enjoying the gorgeous weather.

“I asked Henley what she would like for her birthday and she said ‘chocolate’ so we took her to the Chocolate Café and had gingerbread hot chocolate.

“Henley asked if we can come back for all her birthdays — that’s quite a commitment but we will certainly come back.”

Jake came up with his daughter’s name after watching a documentary on the Eagles, whose drummer is Don Henley.

The family decided to go on their trip so they could spend more time with each other and sold their house and most of their belongings to help finance it.

They are still earning money as Jake owns his own business consultancy and Michelle does her own consultancy work in the afternoons while their children have a nap. Jake said: “I was travelling for work a lot and I was absent from the kids every other week or so and I started to yearn to be around them a lot more.

“We were at the point where they would very soon be on the path to school and that daily routine.

“They are only going to be this small for a short period of time so it is a great opportunity for them to see the world.”

Michelle said people often suggested the children are too young for the trip but she doesn’t think so.

“It is a great time for them because they want to be with us,” she said.

“They are excited about everything — a castle is not boring to them, or a new playground. We could be taking a walk on the sidewalk and they find a new stick or a new rock. They find excitement in everything.”

The Schomps have called their tour “Retired Toddlers” as they have swapped play dates and nursery for travelling and have kept up a video journal of their experiences.

They began the journey in Vancouver and then visited New Zealand, Australia, Borneo, Malaysia, Bali and Cambodia. Jake said: “Part of this trip is getting the kids to experience the world but it is also for us as a couple.

“I had never been to England before and it is just glorious. It is great driving on the English country roads. Henley is such a beautiful town and the huge playground is amazing.”

Michelle added: “Every road is so picturesque, we have fallen in love with England. Jake was born in New England so it’s great to see Old England where we can recognise place names.”

The couple say the trip will continue “indefinitely” until the children are old enough to start school and then they will settle down but they don’t know where yet.

Michelle said: “We said we would travel for a couple of months in the US but that turned into six months and then internationally.

“We could live anywhere and every place we have loved so much. When we were in Henley I did turn to Jake and say ‘I could live here’ so in the future who knows!”

The family are now travelling to Scotland before moving on to Sweden, Norway and Portugal.