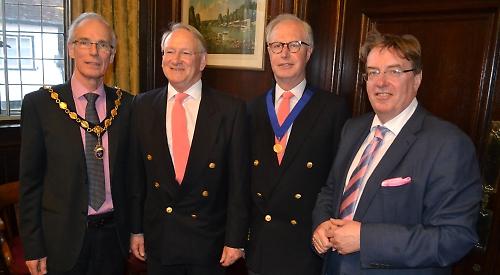 AN “unsung hero” and the most successful rowing club in the world were the recipients of this year’s Henley Town Medal.

Volunteer Ian Forster, 85, of Elizabeth Road, was honoured for almost half a century of helping community organisations in the town, while Leander Club received the corporate award.

Mr Forster is the longest serving member of the Henley Lions and has volunteered for the Henley Round Table, the 41 Club and, until recently, was a driver for the Henley HandyBus.

The Mayor Julian Brookes said: “He’s the archetypal unsung hero. He had helped so many people and not sought any recognition for himself.”

Mr Forster told the Henley Standard: “I was totally shocked and surprised and I’m very proud and quite embarrassed!”

Leander Club, founded in 1818 and established in Henley in 1897, was given the corporate award.

The Mayor said: “Leander is a shining light for the town and the Heroes’ Return was one of the sporting highlights of the civic year.”