Days of congestion caused by emergency repairs in busy through-road 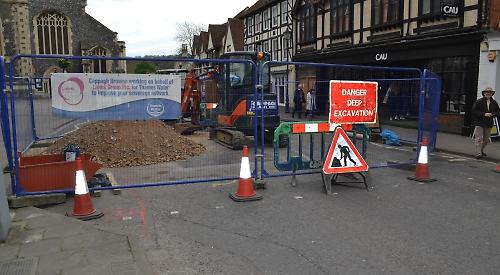 DRIVERS faced delays of more than an hour coming through Henley this week after a main road in the town was closed for emergency repairs.

Hart Street was shut on Sunday morning after a sewage pipe was found to have collapsed during routine work by Thames Water contractors. The whole length of the street was closed from Henley Bridge to Market Place, causing long tailbacks and congestion throughout the town and beyond.

Visitors coming to Henley to enjoy the sunshine were caught up in the chaos as drivers coming across Henley Bridge were forced to take a detour via Riverside, Station Road and Reading Road and traffic was backed up on Remenham Hill and Fair Mile.

There were similar problems during the rush hours throughout the week when queues stretched back as far as Bix and some motorists turned around rather than waiting to get into Henley.

The work by contractors Cappagh Browne was due to finish yesterday (Thursday)and the road to re-open in time for the Easter weekend when a large number of visitors is expected. David Nimmo Smith, a town councillor and cabinet member for environment on Oxfordshire County Council, the highways authority, said the damaged pipe was discovered on Tuesday last week and required emergency repairs.

He said: “The sewer collapsed and it’s backing up the line to the shops. We can’t stop that so we are trying to work around it. As soon as I got notice I put it on social media. I met with officers and contractors at the site on Friday and asked if we could have one lane open but they said the excavation was 2.4m across and they needed a metre each side.

“Altogether that is around 5m in width and we agreed that while you could possibly get cars past, you couldn’t get anything bigger and we would have to close the road.”

Cllr Nimmo Smith urged drivers to pay attention to warning signs on the way into Henley.

He said: “I came across a lorry driver on Sunday who wanted to go across the bridge because his sat-nav told him to go down Hart Street. I’m asking people to ignore their sat-navs when they see signs that there’s a blockage up ahead.”

There was criticism that the roadworks were not sufficiently advertised nor enough signage placed on approach roads.

Writing on Facebook, Sue Worth, from Nettlebed, said: “Where are all the warning signs? There has been nothing on the A321 approach to Henley. Usually a nice yellow sign warns of road closures but not in this case.”

Emma Sweet, marketing manager for Brakespear, said: “Any plans to try to improve the situation tomorrow? Maybe turning some of the traffic lights off? The ones outside the Angel and at top of Hart Street would be a big help.

“Can’t carry on like this all week. Not a good impression for school holiday visitors.”

Mark Dunlop, landlord at the Angel on the Bridge pub in Thames Side, said he had witnessed “complete gridlock”.

Thames Water said the diversion was organised and signage was in place throughout the town.

A spokesman apologised to everyone who was affected but said the work was unavoidable.

Ken Arlett, who is standing for election to Henley Town Council in a by-election next month, was out campaigning on Monday when he saw traffic queuing at Henley Bridge.

He directed drivers coming along Thames Side and wanting to turn left across the bridge to ignore the traffic lights as there was no traffic coming from Hart Street.

Mr Arlett said: “I shouldn’t have done it but I was standing there waving traffic through for a while and it started dissipating. I’m surprised an engineer didn’t look at doing that.

“It’s not rocket science and I’m amazed there was no one in the town looking at the problems that would arise on the first day. You have got to put decent diversions in place.”

Traders in Hart Street said their custom had been affected as there were fewer drivers and pedestrians passing.

Jack Free, of Jack’s Gallery, said: “The sewer has overflowed three times in the past six months and I’ve reported it every time.

“What’s slightly annoying is that last week they dug up the opposite side of the road to do something else. Why couldn’t they do it all in one go?

“The offshoot is that there’s no passing trade. Since the work started I’ve hardly had anyone in. Sunday would typically be very busy as it was very sunny and during the Easter holidays.

“I understand they have to do it and no time is a good time but it will have a considerable effect as Easter is a busy time.”

Anette March, of White Gdn florists, said: “It’s a shame. If it has to be done they’ve chosen the right time with the kids on holiday but it’s going to affect trade.

“We won’t get any compensation and if we do we are going to have to wait months for about £50. That’s not going to make up for a week of lost earnings.”

Purna Gurung, a manager at CaféRouge, said: “The noise is really affecting us. The road is completely blocked and sometimes the noise and dust stops people sitting outside.”