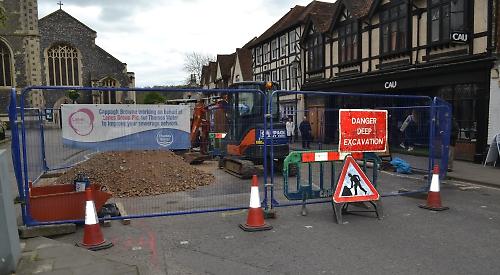 The road was shut on Sunday after a number of defects were discovered in the pipe while workmen for Thames Water carried out a routine blockage clearance.

They say the work is needed to prevent flooding which could affect nearby homes and businesses.

The closure between the junctions at Duke Street, Bell Street and Market Place and Henley Bridge led to long tailbacks in the town, with traffic queuing for up to an hour on approach roads.

Contractors Cappagh Browne were delayed on Monday due to a broken hose on the digger.

The hole used to access the pipe was filled on Tuesday and Henley Mayor Julian Brookes says he believes the road should be open by 9am.

He said: “If all goes well and there are no further machinery malfunctions, we expect Cappagh to be gone Thursday morning, when we can have our road back.

“Cappagh are doing everything they can to open before the rush hour.”