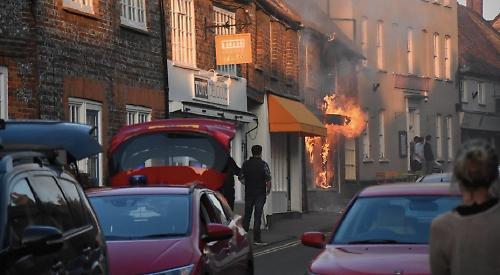 A COUPLE whose business and home were wrecked in a fire have thanked the public and firefighters for their support.

Derek and Glennys Starling were rescued by passers-by from their house in High Street, Watlington, as the blaze raged at their hardware shop next door, DG Homecare.

The couple have been staying with family since the incident on the evening of Friday, April 7.

In a statement, the family said: “Mr and Mrs Starling thank everybody in Watlington for their concern and patience while High Street has been closed. They have nothing but praise for all the firefighters who saved the building. The building will be rebuilt.”

The store was gutted and the Starlings’ home damaged and the building has been boarded up and fenced off.

The fire was accidental caused by a fault in ceiling lighting. Incident commander Marcus Reay said: “The ballast in the electrical lighting had dropped on to some recent deliveries in the store — fibreglass sandpaper and cardboard — which had subsequently ignited.”

Firefighters from Watlington fire station were unable to attend the incident due to lack of crew members so appliances from Thame, Wallingford and High Wycombe were called in to tackle the flames which ripped through the shop.

Mr Reay said: “On this occasion Watlington fire station was not able to attend the fire due to only having three personnel available but, of course, Thames Valley fire control sent the nearest available appliances.

“I’d like to thank all the members of the public who helped guide our crews to the scene and helped close the High Street to other vehicles. This action supported the fire and rescue service on our arrival.

“The Oxfordshire and Buckinghamshire crews worked very well together to stop the spread of the fire into the Watlington Club. The building has been shored up. However, there are still loose tiles on the roof.”

Mr Reay appealed to residents to join the fire service.

He said: “Over the past two weeks six people have made contact with the station and are looking to join up but we still need more for the next course in October.”

A “have a go” open day will be held at Henley fire station in West Street on Sunday with three sessions at 10am, noon and 2pm. Visitors can try the tests they will need to pass to join the fire service.