Eating meat got me to 100, says former village butcher 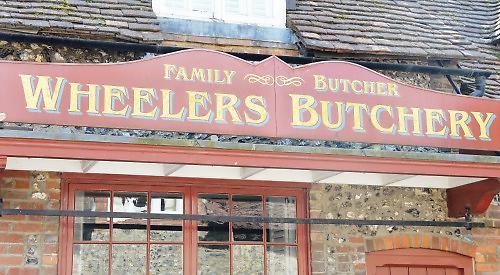 THE former village butcher of Hambleden has celebrated his 100th birthday with residents and friends.

About 100 people attended a party at the village hall in honour of Arthur Wheeler, who worked from a unit next to the Stag and Huntsman pub from 1955 until he retired in 1980.

The guests included Lady Hambleden, who has known Mr Wheeler since she moved to the village in the same year that he took over the shop, Lord Kimberley of Medmenham and Rev Stephen Southgate, rector of Hambleden.

Also present was cartoonist Gray Jolliffe, from Pheasants Hill, who had designed a birthday card which was signed by dozens of visitors.

The image on the front, which depicted Mr Jolliffe congratulating Mr Wheeler, was also published in that day’s Daily Mail as part of his regular Chloe & Co strip.

He signed the card with the message: “Congratulations, Arthur! And remember, 100 is no excuse to slow down!”

Mr Wheeler was presented with a cake baked by villager Louise Foers which featured a Lego butcher figure carrying a steak and a meat cleaver.

The cake was decorated with white Maltesers, a pig, sheep and cow made of icing sugar and a miniature version of Mr Wheeler’s old shop awning, which still hangs above the premises. Guests enjoyed a hot lunch cooked by Liz Ellis and a team of volunteers while Chris Whitehead, the organiser, gave a welcoming speech.

Mr Wheeler, was born on April 20, 1917 — the fifth of eight children — and grew up in Crocker End, near Nettlebed. He left school aged 14 to work at the village bakery.

Four years later he trained as a shopkeeper and slaughterman at William Lee’s butchers in Henley.

Mr Lee also had a shop in Hambleden, which Mr Wheeler’s brother Bill managed. Mr Wheeler met his wife Edith here and they married in 1939.

He was called up serve in the Second World War in 1941, shortly after their daughter Joy was born.

He spent most of the war as a tractor driver hauling tanks across India on trailers to support the Burma campaign.

On his return, he worked as a handyman and gardener until Mr Lee made him manager of his Hambleden shop in 1955. He later bought it to run independently.

The property became a private house after Mr Wheeler retired but the sign has been left up as film crews often visit Hambleden to shoot traditional English country scenes.

Mr Wheeler and his wife briefly moved to Marlow after he retired but returned to Hambleden a short while later.

Mrs Wheeler died in 2010 and his daughter followed in 2013 but he has seven grandchildren, seven great-grandchildren and 10 nephews and nieces, many of whom attended a private celebration on his actual birthday yesterday (Thursday).

He remains an active worshipper at St Mary’s Church in Hambleden, where he was a sidesman for many years, and organises regular dinner evenings with friends at pubs in the area.

He is a founder member and past president of the Hambleden and district branch of the Royal British Legion and was awarded the Legion’s gold badge for outstanding service. Mr Wheeler said: “I feel very thankful that I’ve reached this age and consider myself a very happy man.

“I’m very pleased to see the village coming together and think it’s very generous of them to lay something like this on.

“I’ve always been very happy in Hambleden as there’s a great sense of community and I’ve mixed with a lot of the people who live here.

“I have no idea how I’ve managed to live this long — it must be all the good meat I ate!”

Lady Hambleden said: “I’ve known Arthur for most of my life as I first met him 62 years ago, which is not a bad length of time.

“This is the first time I’ve ever been to a 100th birthday celebration but there’s a first time for everything!

“It’s a lovely day for it and I think everyone is really happy to be here for the occasion.”