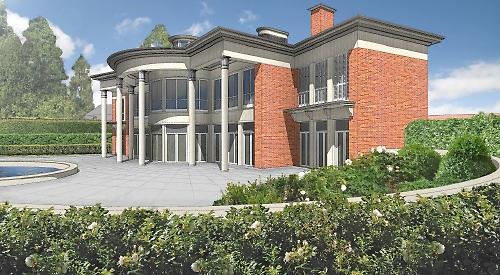 A BARRISTER and life peer who won a fight to build a six-bedroom house likened to a prison façade by a critic is now selling the land.

Baron Marks of Henley won an appeal last year over plans to demolish seven outbuildings at Walled Garden House in Shiplake Row and build the two-storey house in their place.

South Oxfordshire District Council had turned down the application, saying the property would be “intrusive” and its location was unacceptable.

Lord Marks has now put the 2.5-acre plot on the market for £2.95million, along with a second lot which includes a five-bedroom property and grounds.

Welldon Properties, which is based at Holmwood, said the new brick and flint house would feature west and east halls, a pool, “sunspace” and a triple garage.

Supporters said the house would be of significant importance in architectural history and a “landmark”.

But several villagers objected to the appearance and size of the house, describing it as “incongruous” and “ostentatious” and not sympathetic to the surrounding area.

Richard Pawson, of Gravel Lane, said the style was like a property from the TV drama Footballers’ Wives.

Ivan Gardiner, of New Road, Binfield Heath, said: “The only place for a mansion looking like this one is Dallas, Texas.”

Professor Robert Adam, a director of Adam Architecture, who designed the house, said: “This will provide a sustainable use for a derelict site in perpetuity and I am sure that, in time, local people will come to see that it will have very little impact on the village and, hopefully, will appreciate the architecture.”

Lord Marks is married with seven children. He and his wife Medina have carried out extensive renovation work at Holmwood.