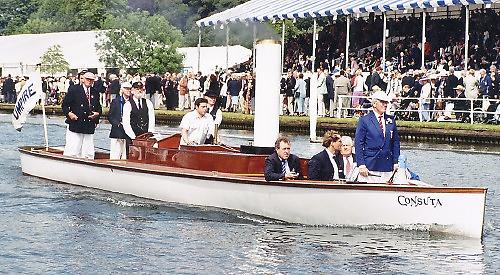 A VICTORIAN steam launch which once ferried umpires at Henley Royal Regatta is to be restored after its trustees secured a £99,500 grant from the Heritage Lottery Fund.

Consuta, which was commissioned by Leander Club on behalf of the regatta stewards in 1898, will receive a new boiler to replace the one that was installed as part of a restoration carried out in 2001.

The old boiler was built in the Eighties and is losing efficiency, which makes the vessel difficult to handle at its top speed of about 27mph, and the pipework leaks.

The new boiler, which will be installed in stages over a period of 18 months, will use a more historically accurate design and will be less bulky so will return the launch to its original profile.

Consuta was built at Goring by marine engineer Samuel Saunders, whose workshop was based at what is now the Royal Mail sorting office in High Street, next to the bridge.

It was the first launch to use his “Consuta” technique of building hulls, which involved stitching four layers of mahogany and waterproofed fabric together using copper wire.

It served as an umpire’s launch at the royal regatta for many decades before falling into disrepair after the original boiler was replaced with a petrol engine. A charity was founded to get it back in working order in 1998.

Consuta returned to the regatta for a brief period in the early 2000s and still comes back every year to offer pleasure trips from Phyllis Court Club. It continues to serve as an umpire’s launch at the Henley Women’s Regatta and Goring and Streatley Regatta and regularly appears at Henley’s Thames Traditional Boat Festival.

The trustees will erect a display at Beale Park, near Pangbourne, where the boat is kept, explaining how it works and how the upgrade will improve its performance.

Paul Smith, whose father Brian Smith set up the trust, said: “The boat has always been a bit too heavy since the restoration, mostly because of the boiler.

“She grumbles when you’re trying to go quickly and isn’t easy for inexperienced users to handle because you’ve got to keep the water levels down.

“We’d always thought a new boiler would be nice but we’ve been making do until now, when the tubes started to leak at high speeds.

“The Heritage Lottery Fund were very positive about the idea as it is a very important historic asset which benefits many people in the community.

“We’re delighted they agreed to support us as it will keep Consuta running longer and guarantee its survival while bringing it more in line with Sam Saunders’ original design.”