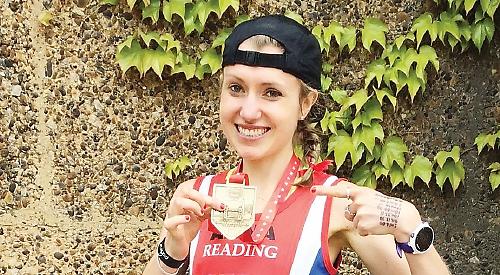 A FORMER pupil at the Piggott School in Wargrave was the
fastest non-elite woman at this year’s London Marathon.

The 26-year-old physiotherapist was the fifth fastest British woman overall, making her the winner of the English Athletics Championship race.

Miss Boniface realised she was the leading female in the public race at about 14 miles and, despite pain and vision problems, she stormed home to the delight of her family, friends and coach Rob McKim.

“I was so happy,” she said. “I ended up doing the exact plan that Rob had predicted all those months ago, so our teamwork paid off. It was great to see him at the end of the race.

“However, what meant the most to me was how proud my dad was. I felt I needed to prove to him that I had a shot at doing something special and it made me so happy that he was there and understood what running means to me.

“This is what motivated me to push myself when I was really hurting.”

Miss Boniface took up running while at school and competed in the Green Park challenge, a 3km race in Reading.

She later joined Reading Athletics Club and competed for Berkshire at the English Schools cross-country championships.

Miss Boniface, who lives in Twyford, said: “PE was always my favourite subject. I enjoyed being on the netball, basketball and football teams. I ran cross- country every year at school but wasn’t entirely enthusiastic.

“When I ran the Green Park challenge as part of a school team, Mrs [Melissa] Hopkins gave me a much-needed nudge of encouragement to focus more on running.”

After finishing her A-levels in 2009, she suffered a hip injury which left her on crutches.

She spent her gap year recovering and got back into training when she went to Brunel University to study physiotherapy and has continued since she started working.

Miss Boniface said: “I spent many seasons as a very average club runner, finishing middle of the pack in races. Then two years ago, with sheer determination and hard work, I started to improve.”

She ran her first marathon last year finishing in two hours and 45 minutes. She has also taken part in the Reading half marathon for the last five years.

Miss Boniface said: “I now have my sights firmly set on an international vest, something I could have never imagined a few years ago.

“I would like to thank the PE department, particularly Mrs Hopkins. The encouragement I received has given me the passion I need to be a marathon runner.”

Miss Boniface was running the marathon for the Thames Valley Air Ambulance and raised £785. To making a donation, visit www.justgiving.com/fundraising/
Anna-Boniface3