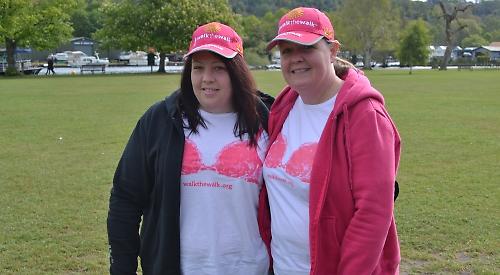 TWO women from Wargrave are to take part in a 26-mile charity walk together.

Best friends Emma Brunsdon and Aly Shurey will be among thousands of people at the 20th annual Moonwalk in London next Saturday (May 13).

The night-time walk around the capital is in aid of breast cancer charity Walk the Walk and all the participants wear a specially decorated bra on the outside of their clothes.

Mrs Brunsdon, 42, a self-employed virtual assistant, and Miss Shurey, 33, a senior carer, first met in 2014 while dropping off their daughters at the village pre-school in East View Road.

Miss Shurey, who lives in Highfield Park with her partner Ben Wontner-Smith and children Amber, four and Chloe, two, came up with the idea of taking part in Moonwalk after hearing a colleague at work talking about it.

Her mother Caroline Newman died of cancer almost a decade ago.

Mrs Brunsdon, who lives in Fidlers Walk with husband Tim and daughter Catherine, four, said: “Aly texted me one day to ask if I fancied doing the Moonwalk and I immediately said ‘yes’.

“I think she secretly hoped I would say no but it’s something I’ve always wanted to do. I did the Race for Life three years in a row, which is laudable but there are only so many times you can ask for sponsorship for what is a relatively short race.

“I wanted to do something bigger. I’d wanted to do the Moonwalk for years but no one was ever mad enough to do it with me.”

Since signing up three months ago, the women have walked hundreds of miles in training.

Mrs Brunsdon said: “We’ve both been trying to improve our fitness levels and we’ve had quite an intense training regime.

“Aly does ‘clubbercise’ but I’ve just been sticking to walking. I try to walk whenever I can, especially around the village, so I’m quite prepared for a long walk.

“We try to get out three times a week, starting at three miles and most recently went out to do 20 miles on a weekend.

“It’s hard work but it doesn’t feel as long when you have someone there to talk to, although we do end up with sore feet.”

Miss Shurey said: “We take some snacks on training walks and we try to have a laugh with it. We end up laughing about nonsense — if only other people could hear the conversations we have!

“I never used to walk anywhere as I would take the car but now I’m walking miles. Emma’s fitness is much better than mine so she has been putting up with me lagging behind.

“I’ve told her that on the night she should leave me and go at her own pace but she said, ‘no, we started together and we will finish together’ — even if it means she drags me across the line!”

The Moonwalkers will start in Clapham Common and pass landmarks including the London Eye, Buckingham Palace, Tower Bridge and St Paul’s Cathedral.

The Wargrave women will be in the third wave of walkers, setting off at about 11.15pm.

Mrs Brunsdon said: “It’s scary but exciting as well. We started off worrying about how fast we would do it but now we are just looking forward to it. Other people who have done it says there’s an amazing atmosphere.

“We haven’t decorated our bras yet but we have ideas. As it’s the 20th anniversary they are going for a ‘Roaring Twenties’ theme with lots of sequins and tassels.”

The women have already raised almost £500.

Mrs Brunsdon said: “I’ve always supported breast cancer charities. The more money that can be raised for research in to any cancer the closer we will get to a cure.”

l In 2013 two women from Wargrave took part in the Iceland version of the Moonwalk. Megan Rankin, a breast cancer survivor, and Sue Murphy decided to join the event after completing the London MoonWalk in 2007 and raising more than £5,000.