Mum helped me overcome anorexia before it killed me 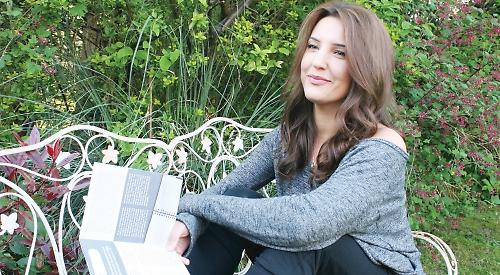 A WOMAN whose battle with anorexia almost killed her says she wants to help others suffering from the disease.

Frances Shillito, 27, was a teenager when she began to drastically reduce her diet, leading to serious health problems, including bone damage, loss of muscle and the temporary failure of her menstrual cycle.

The disease got so bad that she was taken out of college after just three months and was put into treatment over fears her heart could stop.

She was put on a strict regime which involved constant supervision and she gradually began to regain weight.

A decade later, Miss Shillito is now a successful make-up artist and has written a booklet on her battle with anorexia.

She hopes to speak at school assemblies and other events to raise awareness of the condition and help other sufferers.

Miss Shillito grew up in Peppard with her parents Lucy and Andy and sister Holly, 30.

She went to Sonning Common Primary School and Gillotts School in Henley, where she discovered her love for make-up and went on to study it at Reading College.

It was while at school that her anorexia began to take hold. She was just 15 when she began to eat less while pushing her body through punishing exercise regimes.

She suffered with crippling hunger pains, headaches and insomnia, while losing hair from her head and growing it on her arms, neck and legs.

Miss Shillito says: “There’s no singular cause for it, it’s a coping mechanism to what’s going on around you and it’s caused by a chemical imbalance according to studies.

“It happens very slowly but takes hold quickly once it kicks in. It’s very secretive and you find ways to restrict what you eat.

“Everyone is different but if you are worried about someone you need to pay attention to whether they are disappearing after meals or excluding themselves from social situations.”

She said the disease was very personal and many of her close friends knew nothing about it.

She was very defensive about the condition, convincing herself she was in control while also going to great lengths to conceal it from others.

She would spend hours applying numerous coats of make-up every morning and wore baggy clothes to hide her frame.

Miss Shillito says: “It doesn’t just affect your weight. You lie a lot and avoid social situations. I stopped performing quite as well at school and stopped going out.

“Life just becomes about anorexia and it does happen very quickly. You become more and more addicted to being like that.

“I looked so ill that I wore a significant amount of make-up to cover up how grey I looked. I wore baggy clothes so people couldn’t see how skinny I was.

“The further you fall the more you’ve got to deal with. You know what you’re doing isn’t right.”

There was one person who realised that something wasn’t right — her mother Lucy.

Miss Shillito says: “People at school didn’t pick up on it but my mum knew right away. She’s my mum and nothing gets past her.

“She took me to the doctor four times over two years but they said it was just a phase and my body mass index wasn’t low enough.

“If we had caught it when it started it wouldn’t have gone as far as it did.

“It caused lots of arguments and was very stressful. It was hard on my mum because no one else around would listen to her, she felt like she was smacking her head against a wall.

“I was in denial as it’s a mental illness as well. You think you are totally under control and everyone else is just being silly. You get very protective, you have something you are trying to do but other people want to stop you from doing it.”

Miss Shillito’s condition finally reached a crisis point in 2007, when she was withdrawn from college and her mother took her to the doctor to demand she was given help.

She says: “My mum said she wasn’t leaving until they did something about it, so they did. I got referred in November and I had outpatient treatment at home where they said if I didn’t respond in two weeks they were worried my heart would stop.

“It’s soul-destroying, I wouldn’t wish it on my worst enemy. Mentally and physically, it’s tiring and that’s why it has one of the highest mortality rates, either dying from it or committing suicide.”

As part of her recovery, Miss Shillito had to be watched in all situations, meaning she couldn’t even sleep or wash alone. She often had to be hand-fed meals such as yoghurts as she was too scared to eat them alone.

She would break cutlery to avoid eating and her mother and sister also found mouldy food hidden in her cupboards.

Miss Shillito says: “I had to be supervised at all times. I had to sleep in my mum’s bed, be supervised while bathing and I had a strict eating regime. I had to tie my hair back so I didn’t hide the food — you will hide it wherever you can.

“You have to try to get mentally better at the same pace. It’s a mixture of treatment and therapy sessions. I was going twice a week both individually and with family.

“You can have all the treatment in the world but you have to want to change. Eventually a part of your brain just switches.

“I knew I had to get better but that process was incredibly hard. Food was the devil and I’d do anything not to eat it. I cried when I ate but each day I got better and better.

“It took me two years to recover and by then I was 19. Even when I was ‘normal’ again my mum would never take her eyes off me.” While she was recovering, she began to think about rejoining college to study make-up, which had been her dream.

Miss Shillito says: “They set up goals or something to aim for to make you want to get better. One of those was driving. I wasn’t allowed to start learning to drive, which is frustrating as a 17-year-old when all your friends are doing it.

“I was desperate to be a make-up artist and while I was getting better I looked at colleges in London but the only way I was going to get there was if I made myself better.”

Finally, in 2009 she was well enough to begin attending the London School of Beauty and Make-up, although she admits leaving to study was a “big step”, not just for her but for her mother too.

After graduating, she worked for make-up brand Mac before moving in to freelancing.

She is now one half of Shillito
Sisters along with Holly, a hair stylist. The pair have worked on TV and music videos and at corporate events and have provided services for celebrities including body coach Joe Wicks, singer Courtney Love and actor Danny Dyer.

Miss Shillito, who now lives in Reading, says the road to recovery was a hard one and she suffered two relapses in 2011 and 2012.

She has written a booklet on her experiences, Life As It Is Now, which she plans to hand out to GP surgeries, schools, gyms and hospitals.

She says: “It’s to give support to people with eating disorders.

“When you are anorexic it becomes the focus of your life. You think it’s going to make your life better but it will actually kill you.

“My family couldn’t understand why I was so scared of a piece of food but it’s not just that you want to be thin. It’s such a misunderstood illness and I want people to speak our language so they can get help early.”

She will be returning to Gillotts later this year to speak at assemblies and plans to do similar events at other schools.

She says: “People might hold back at the end of an assembly and ask if they are having problems. That’s important because in another three months, when in their exams, they could be in the grip of it.”

Miss Shillito has started an Instagram account, also called Life As It Is Now, in which she shares motivational messages, fitness and food tips.

She said: “Social media is an amazing thing but also a dangerous place. I want to show people surviving anorexia and positive things.

“There’s light at the end of the tunnel and you will get there.”