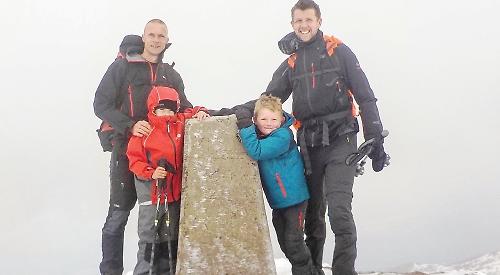 Alfred Cary and Alexander Lamacraft, from Shiplake, scaled the 4,411ft peak during the May Day bank holiday weekend.

The pair set off for the Highlands with their fathers Tom Cary and Stephen Lamacraft as soon as they had finished classes at Shiplake Primary School on the Friday.

They caught an overnight train from London Euston to Fortwilliam which arrived shortly before lunchtime the next day.

They began their climb at about 8.30am on the Sunday and about four hours later they reached the summit, where they encountered snow, mist and freezing winds.

They rested for 20 minutes, sheltering behind a cairn, and drank hot chocolate before beginning the four-hour trek back down the mountain.

The expedition raised £4,169 for the Evelina London Children’s Hospital, where Alfred’s one-year-old cousin Esther spent time in intensive care before undergoing surgery for a heart condition.

Another £1,646 will go to the Chiltern Centre for disabled children, off Greys Road, Henley.

The boys’ fathers came up with the idea of the expedition as the quartet regularly walk around the South Oxfordshire countryside together and take part in outdoor activities.

On New Year’s Day, they rowed to Marlow by Canadian canoe, so Mr Cary and Mr Lamacraft decided their sons were ready for a tougher challenge.

They practised by scaling Pen Y Fan in the Brecon Beacons, which is 2,907ft tall, in March.

Mr Cary, of Mill Road, said: “The boys are very outdoorsy and we decided this would be a good way for them to learn about raising money for charity while having a good time.

“It’s not the height of summer so we knew there would be snow at the summit and the weather would be unpredictable but we thought we could give it a go. There was always the option to back down if it got too bad and we knew it would be an exciting adventure whatever happened.

“The boys were very enthusiastic after our trip to Wales. They felt they’d already done a good chunk of the bigger climb and it wouldn’t be much more difficult.

“I was worried that I would slow them down because I’d run the London Marathon the week before.

“I finished in four hours despite having a month off training with a knee injury, which I didn’t want to flare up again because it would have ruined their trip.

“Luckily, the training I’d done up until March saw me through the race, even if I was a bit slower than I’d hoped.”

When they arrived in Scotland, the group considered setting off immediately as the weather forecast for the following day was wet and windy but they decided it would be better to rest overnight. Mr Cary said: “When we started it was overcast and a little bit rainy but fortunately it wasn’t too dramatic.

“We were heavily armed with flapjacks, satsumas and chocolate and had loaded up on carbs so we had plenty of energy and made sure to stop for a rest every 30 minutes or so.

“The winds were strong and there was snow as we neared the summit but it wasn’t so cold that it had frozen. It was slushy so we still had a good grip underfoot and were able to keep pressing ahead.

“We had to take it slowly and we had brought ropes and harnesses to keep the boys near us but we didn’t have to use them. There were other walkers coming down from the summit so we knew it was possible and the visibility was good so there wasn’t any real danger.

“It was a bit cloudy at the top and there wasn’t much of a view of the valley below but the boys were proud to have made it and we kept them well away from the edge.

“Lots of people were stopping to ask them about their day and although they were a bit shy, they enjoyed explaining about the trip and the fund-raising.

“They were very keen to get out of the wind, so we didn’t hang around for too long. We expected the descent to be quicker but we were pretty tired so it took about the same time, though the boys enjoyed being able to slide down the snow on their bottoms. It was a great relief to reach the bottom. We still had a few hours before our train was due to leave so we stopped to get something to eat and talk about the day.

“The boys were so happy and we were very proud of them.”

Mr Lamacraft, of Northfield Avenue, said: “It was touch-and-go whether we would make it because it’s a tough old climb.

“It was a challenge to keep the children happy and motivated in the face of drizzle and wind but we had a good supply of sweets and other bribes which kept them going.

“We also had to break out the mountain poles to claw our way to the top, where the visibility was so poor that we could barely stand on the trig point.

“I think the conditions were perfect because they weren’t unbearable but they were challenging enough that the boys felt they’d had an adventure. If it had been too nice, they wouldn’t have got the full mountaineering experience.

“I’m over the moon with the amount we’ve raised and we’re really thankful for everyone’s support.”

Mr Cary added: “We’ve had a few thoughts about what we might do next but we’re keeping them to ourselves for the time being or our wives might excommunicate us!”