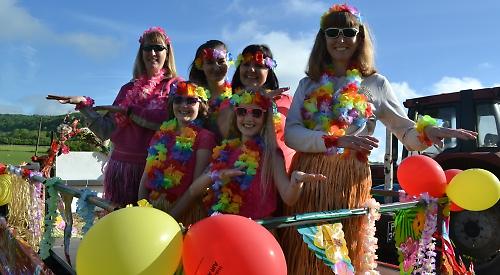 IT may not have been quite tropical weather but the sun did come out for the Hawaiian-themed Chiltern Vintage Tractor Run on Sunday.

A total of 67 tractors took part in the 11th annual event, which raises money for the Thames Valley air ambulance.

Some were pulling trailers full of people, many of whom wore tropical garlands as they were given a free ride through the Chilterns countryside.

The run began in a field near Fingest where the vehicles were blessed by Rev Stephen Southgate, rector of Hambleden, before they set off.

The convoy went through Frieth, Hambleden and Fawley before stopping for lunch at Fawley Hill, the home of Sir William and Lady McAlpine, who are fans of vintage vehicles.

About 100 people visited the couple’s estate to admire the tractors, most of which dated back to the Sixties or earlier.

There was a raffle and a competition to guess the weight of a Ferguson tractor cake made by Martin Brake. The winner was Ben Woodward, who guessed the closest to the 30lb or 13.6kg.

After lunch, the convoy made its way back to Fingest.

Organiser Gary Anderson, who was driving a 1949 Ferguson TED 20, said he thought a record number of tractors had taken part. “It was brilliant,” he said. “The weather was on our side too, which made it.

“This is a family fun day. It’s about fund-raising but if you put an element of fun into it it’s not just a bunch of old blokes plodding around on tractors!

“We came across many other drivers who were loving it. People were also standing in their front gardens waving as we went past.”

Two tractors broke down during the run and had to be towed back to Fingest.

Mr Anderson thanked the McAlpines for hosting the lunch as well as the landowners, the marshals, the volunteers who provided food and refreshments and those who had planned the route.

It’s not yet known how much was raised but until this year the run had made a total of £34,395.