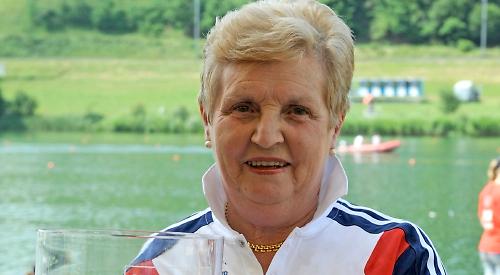 TRIBUTES have been paid to a woman who was a stalwart of British rowing for more than 60 years.

Dame Di Ellis, a former chairman of British Rowing, passed away peacefully on Thursday last week following a short illness. She was 79.

She was a former international competitor with England and Great Britain and became GB team manager in 1988.

A year later she took over as chairman of the Amateur Rowing Association, which became British Rowing in 2009, and stayed in post until 2013.

Dame Di was made a dame in the Queen’s Birthday Honours in 2013 and in 2014 was appointed an honorary president of British Rowing.

She was the first woman to be made a steward of Henley Royal Regatta in 1997 and was among the first female members of Leander Club.

In a statement, British Rowing said: “Dame Di was an instrumental figure and stalwart of British rowing for over 60 years.

“During her life, she was an inspiration and champion to so many, both within rowing and across the wider British sporting landscape.

“Her enduring love of rowing, her grace and fortitude will never be matched; she will be dearly missed by all.”

Sir Steve Redgrave, chairman of Henley Royal Regatta, said: “A great advocate of rowing, Di worked tirelessly as a volunteer for the sport and for this rowing owes her a huge debt of gratitude.

“She will be deeply missed by all the stewards of the regatta and her unique commitment to the sport of rowing will be difficult for anyone to match.”

Jeremy Randall, president of Leander Club, said: “Di Ellis was a hugely influential figure in British Rowing, firstly as an athlete and cox, and then as an administrator who helped guide GB Rowing back to its leading position in world rowing.

“When women were first admitted to Leander we were very pleased to welcome Di among the very first to be elected and she became a familiar face around the club, especially as a resident during regatta week after her election as the first woman steward of Henley Royal Regatta.”

“She was part of the organising committee in its early years and has been a mentor to me since I became chairman in 2013. She went on to become chairman of British Rowing but she always came to the regatta even when she was ill last year.

“After each regatta she would send me a letter with a list of suggestions for how we might improve for the next year, particularly from a rower’s perspective.

“Throughout my career as a club athlete to Olympian and then to organising rowing events, Di has always been there as a source of advice and support. A truly inspirational person and she will be sorely missed.”

Annamarie Phelps, the current British Rowing chairman, said: “Di was an incredible lady: genuine, wise, reflective and truly inspirational. Hers was truly a life to celebrate.

“She was a mentor and confidante to so many, always quietly shaping opinion and thinking ahead. Di will be missed across the breadth of British sport but particularly across British Rowing to which she was entirely devoted.”

Sir Hugh Robertson, chairman of the British Olympic Association, said: “This is a sad day for the entire Olympic movement in this country. Anyone who worked with Di would know that she was not only passionate about sport and its role in society but driven to see greater opportunities carved out for all, especially for women in sport.

“Her family can be proud of her wonderful contribution to sport in this country and can reflect on the fact that Di enriched the lives of so many around her.

“She will be dearly missed, not least by her friends and colleagues on the National Olympic Committee.”

From there she rowed for Great Britain, coxed for England, won national championships gold and won the women’s eights head of the river race seven times, three as a rower and four as a cox.

She was a qualified umpire, secretary of events and chairman of a number of committees and commissions.

Dame Di was chairman of British Rowing for 24 years and was a FISA (World Rowing) delegate, representing Great Britain’s position on the international stage. She won numerous awards from the International Olympic Committee and FISA, among others.

Outside rowing, she served on many boards, including the British Olympic Association, Sport & Recreation Alliance, British Confederation of Sport, Skills Active, Sporting Equals and Sports Resolutions.

Dame Di leaves behind husband John, daughter Claire and two grandsons. A private funeral for family only will be held while a memorial service will take place at St Mary’s Church in Henley later.

The family asks that any messages of condolence are sent through British Rowing at 6 Lower Mall, London, W6 9DJ.