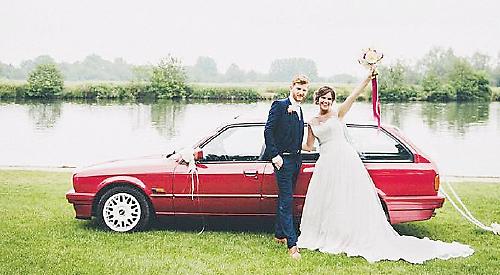 A COUPLE who were left devastated when their classic car which was used at their wedding was stolen have thanked the public after it was found days later.

James and Melinda Dalzell
were asleep at their home in New Road, Shiplake, when the BMW e30 Touring was taken from the driveway in the early hours of Monday, days before their first anniversary.

Mr Dalzell, 29, drove after the thieves in another car but failed to trace them. He says he was expecting never to see the car again but an anonymous tip led police to recover the vehicle at a garage in Sonning Common on Wednesday evening.

He has thanked the kindness of people on social media after hundreds shared a Facebook message appealing for information on the car.

The builder bought the car, which is red with white wheels, two years ago and painstakingly renovated it, spending more than £5,000 and travelling the country looking for parts. It was used as the wedding car when the couple married in June last year and they were planning to drive it to Wales this weekend to celebrate their anniversary.

Mr Dalzell said he and his wife were woken up at about 3.30am by the sound of a car engine but initially thought it was teenagers in the road.

It was only when he recognised the sound of the car that he rushed to a window to see it had gone.

Mr Dalzell said: “I told Mel someone had nicked my car and to call the police. I ran down and got the keys to another car in the driveway.

“I could hear them driving along the bottom of the valley on the road to Henley so I jumped in the car and raced after them.

“I drove around for a couple of hours before Mel said the police were at the house and wanted to talk to me.”

The couple live in the annexe at his mother Tina’s house with their Border collie Pippin.

Mr Dalzell said: “The car was kept round the back of the house behind an electric gate but the fob for the gate was in the car.

“It’s stupid in hindsight but when you are driving in and out daily you do that. The most galling thing is I had spent the afternoon in the car and left it out because I was going to pick up a part from a friend in the evening, the last job on the car.

“He never called so I left it out overnight. Otherwise it was always in the garage and the one time I leave it out it gets nicked.

“The police officer was very nice and kind but said without CCTV or witnesses, there was nothing they could really do.”

The couple put out an appeal on social media and say they are grateful for the response with people from across the country asking others to look out for the BMW.

Mr Dalzell said he believes it was the social media appeal which led to the tip-off.

He said: “I’m elated. This whole thing came about through the kindness of people on social media.

“I’m stunned as the car is in the same condition it was left in and I thought I would never see it again.

“It’s off with forensics so I will hopefully get it back in the next couple of days.

“It was my wife who started the social media appeal. We had 900 shares so if 10 people see each post that’s thousands.

“It gives you faith in people that the horrible people who did this were outwitted by those on social media.”

Mr Dalzell regularly restores old cars but kept the BMW because of its sentimental value.

He said: “I bought the car for £500 from a chap in South London. I’ve spent two-and-a-half years restoring it and getting it up and running.

“Shiplake Motors have also helped me do lots of work, the stuff I couldn’t do in my garage lying on the floor.

“It got a respray and I replaced most of the suspension, seats and interior and engine electronics.

“I was chasing one problem after another but it was mostly completed, there was one more thing to change and then it would be done.

“It cost quite a bit of money, I’ve probably spent over £5,000 but more than that is the hours I’ve spent and the emotional level.

“I’ve driven all over the country getting parts because as a car gets older they are harder to find.

“I’ve always bought old cars and fixed them up. It’s my passion.”

Mrs Dalzell, 26, a dog trainer, added: “This car has immense sentimental value as well as being the product of many, many hours of work from my husband.”

The couple were married at Shiplake College on June 4 last year and then drove the BMW to the Crooked Billet in Stoke Row for their reception.

They drove the car on trips to Croatia and the south of France with friends and are still planning to travel to Wales this weekend.