PICTURE NEWS: all the fun of two school May fairs and Mapledurham spring fete 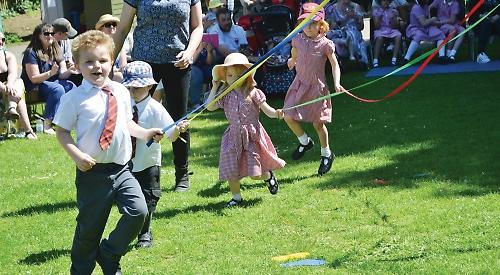 PUPILS danced around the Maypole at the annual May fair held at Badgemore Primary School in Henley in sweltering heat.

Each class took turns performing a dance with the coloured ribbons, watched by their families. Some staff also took part.

The temperature reached 25C during the event at the Hop Gardens school on Friday so that glasses of water had to be passed round the children and stalls offering food and drink had to be moved to the shade.

The spectators shaded themselves from the sun with hats and umbrellas.

The May king and queen, Archie Fulbrook and Tia Boseley, were “crowned” with floral garlands and sat on thrones to watch the displays. They also had to move into the shade.

Archie, 11, thanked outgoing headteacher Jacky Steele, who is leaving the school after three years for a new job in Reading.

Henley Mayor Kellie Hinton, who watched the displays with her daughter Hallie, six, said: “I thought it was brilliant and great fun, particularly the teachers’ first and probably last time dancing around the Maypole!

“I like to see these kind of traditional activities at all our schools. There was a real cohesiveness between pupils, all helping each other out and knowing each other by name.

“It was also really nice to have an event that I could take my daughter to so she could meet pupils from other schools.”

Bev Calvert, a member of the school’s friends group whose nine-year-old son Daniel is a pupil, said: “It was a lovely event with perfect weather and it was great to see the teachers getting involved.

“We raised £101 serving tea, coffee and cake which is good for such a little school.”

Ms Steele said: “The children really enjoy the performances. It was my last May fair so it was quite poignant.”