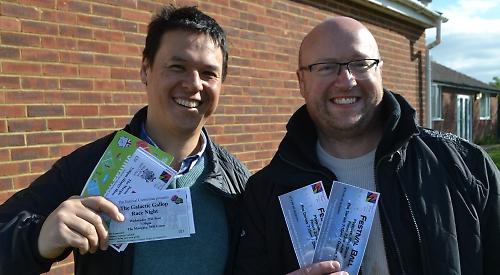 THIS year’s Wargrave Village Festival began on Wednesday with a performance of The Merchant of Venice.

Over the next three weeks 47 events, including a quiz night, dancing competition and talent show, will take place at different venues around the village.

This year’s festival has an “out of this world” theme with related events and children are encouraged to dress up as aliens and science fiction characters.

The traditional open-air performance of a Shakespeare play was given by the Wargrave Theatre Workshop in Mill Green.

The cast includes John Turner as Antonio, Graham Wheal as Bassanio and Emmajane Hughes as Portia.

The production is directed by Joe Haynes, who also plays Shylock, while festival chairman Graham Howe portrays the Prince of Morocco.

It will continue until tomorrow (Saturday), with performances at 8pm.

The Wargrave 10km race will begin in the recreation ground, off Recreation Road, on Sunday from 9.15am.

Later in the day there will be a performance by Bracknell and Wokingham Community Band in Mill Green. The quiz night will also be held in Mill Green but it has already sold out. On Sunday, members of the Wargrave Local History Society will lead a guided walk around the town, setting off from Mill Green at 2.30pm.

On Monday there will be a snooker doubles tournament at Wargrave Snooker Club in Church Street, starting at 7pm.

On Thursday pupils at the Robert Piggott junior and infant schools will be taken into space with a digital planetarium experience in Mill Green and later in the day there will be a barn dance there.

TV presenter and antiques expert Thomas Plant will speak at Wood-
clyffe Hall in High Street on Thursday and local bands will perform at a gig night in Mill Green next Friday.

Next Saturday there will be a food festival called A Taste of Wargrave at Mill Green, with stalls selling food and live demonstrations by chefs including Ryan Simpson from Orwells in Shiplake.

On Saturday and Sunday, June 17 and 18, a dozen gardens in the village will be open to visitors. Some of the gardens will offer tea and cakes. The Woodclyffe allotments off Recreation Road will also be open for anyone interested in a plot.

There will be an open day at the Mumbery nature reserve next Saturday with activities including a “mini-beast hunt”, pond dipping and guided tours.

Next Saturday, there will be the dancing competition at Mill Green inspired by Strictly Come Dancing with a glitterball trophy for the winner.

On Tuesday, June 20 there will be a comedy night in Mill Green, while on Saturday, June 24, the same venue will host a talent show and variety act with music, dancing and a magician.

The festival will close on Sunday, June 25 with a service at St Mary’s Church in Station Road, where former Archbishop of Canterbury Lord Carey will speak to parishioners before the BBO Big Band performs in Mill Green.