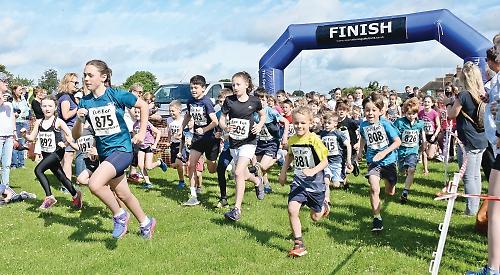 A former student at the Piggott School was the winner of the this year’s Wargrave 10km race.

David Lewis, who lives in the village, was one of more than 340 people to take part in the annual event on Sunday.

The runners gathered in the recreation ground off Recreation Road before they were set off at 10am.

They followed a circular route through Holy Cross and Crazies Hill before completing a final lap of the field on their way to the finish line.

Mr Lewis, who runs for Reading Athletic Club, finished in 32 minutes and 47 seconds, while the first female finisher was clubmate Anna Boniface in 37 minutes and 39 seconds.

Miss Boniface, also an ex-student at the Piggott School, broke her personal best earlier this year when she finished as the fastest non-elite woman at the London Marathon.

The physiotherapist, who regularly runs half-marathons, is also hoping to represent Great Britain in the future. The fastest Wargrave Runner was Richard Price, who came home in 35 minutes and 19 seconds.

Earlier in the morning, more than 100 children had taken part in a fun run around the recreation ground.

It was won by Sam Winters, 10, of Crazies Hill, while the first girl was Katherine Matthews, 11, of Wargrave. Other groups including the village guides group also took part in the race.

Dozens of spectators also attended on the day to watch the runners, while there were stalls selling food and drink and massages were on offer to finishers.

Organiser Mandy Doward said: “It was a good mood, lots of people said how good the atmosphere was and it was very well supported.

“The winning man and woman were both local and Anna did very well in London so she’s a bit of a local celebrity!

“It was good weather for a run, not too hot but not too wet, and we got a good atmosphere and lots of help. The guides and senior section ran their usual cakes and coffee stall. I’d also like to extend a thanks to all our sponsors.”

The event is expected to raise between £2,000 and £4,000, which will be split between local and national charities including Cancer Research UK, Macmillan Cancer Support and the Thames Valley Air Ambulance.

It was sponsored by Physiocare of Twyford, Nuffield Health gym at the nearby Piggott School, and estate agents Hunt and Nash.