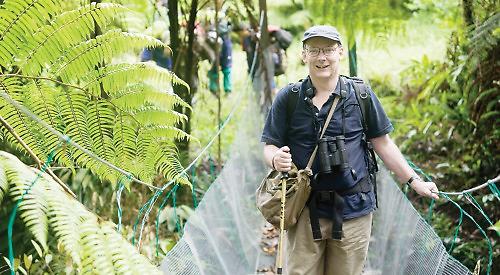 A PHILANTHROPIST from Henley and a professor from Nuney Green, near Goring Heath, have been recognised in the Queen’s birthday honours.

Stephanie Shirley, who was made a dame in 2000, has been made a member of Order of the Companions of Honour.

The award is given to those who have made a major contribution to the arts, science, medicine or government over a long period of time.

The order, now in its 100th year, is limited to 65 members, 45 from the UK and 20 from the Commonwealth, and recipients can use the initials CH after their name.

Dame Stephanie, 83, who lives in Phyllis Court Drive with her husband Derek, was recognised for services to the IT industry and philanthropy.

She said: “It’s quite select with all sorts of interesting people like Vera Lynn and Stephen Hawking and I’m thrilled to be counted among them.”

Dame Stephanie was surprised to receive a letter informing her of the honour and did not tell anyone for three weeks, including her husband as he is “no good at keeping secrets”.

She said: “I got one of those envelopes from the Government and thought it was a tax demand. It was a really lovely surprise but it was very hard not to tell anyone.”

Dame Stephanie will collect her honour from Buckingham Palace later this year. She said: “I’m looking forward to that, I’ve been there before and it’s a wonderful treat.”

Born in Nazi Germany to a Jewish father, Dame Stephanie travelled to Britain as a child and founded her first business, which became Xansa plc, in 1962 on her dining room table.

During 25 years as its chief executive she developed it into a leading business technology group. During her early years in business she adopted the name “Steve” to help her in the male-dominated industry. She has also served on the corporate boards of Tandem Computers Inc, the John Lewis Partnership and AEA Technology.

Her other focus has been on the Shirley Foundation, a charity which has made more than £67million in grants and initiated a number of projects that are pioneering by nature, strategic in impact and significant in money terms. Currently the focus is targeted at national strategies for autism, which her late son Giles suffered with.

Dame Stephanie said: “As a refugee, it never occurred to me that this would happen. I feel very patriotic but to be recognised as having made such a difference to this country is really very good and I’m so happy.”

Other people to have joined the Order of the Companions of Honour include actress Dame Judi Dench and Olympian and sports administrator Lord Coe, while Sir Paul McCartney and chef Delia Smith were also made members this year.

Prof Charles Godfray, who is Hope Professor of zoology at the University of Oxford, has been knighted for services to scientific research and for scientific advice to government.

He said: “Once I had checked it wasn’t some of my students playing a prank on me, I was bowled over and delighted.

“It’s just lovely and you get all sorts of congratulations. It’s a special time and it makes you remember just how much you owe to so many people in your career.”

Sir Charles, who was made a CBE in 2010, has a particular interest in research into malaria.

He is also chairman of the Department for Environment, Food & Rural Affairs’ science advisory council, a trustee director of Rothamsted Research and a trustee of the Food Foundation.

“I am very interested in how science can help with government policy. I’ve been involved in a project with taking all the science and making it useful to policymakers.

“There is a group of us who get together and take the enormous amount of literature and summarize it, so it’s very specific and gives people outside academia the evidence.

“Policymakers can’t wait for more research so they need the best possible research.”

Sir Charles, who is married to Caroline and has lived in this area for almost 20 years, is a population biologist whose work involves ecology, evolution and epidemiology.

He read zoology at Oxford between 1976 and 1979 and moved to Imperial College to do a PhD in insect community ecology.

After completing post-doctoral fellowships and working at the Commonwealth Institute of Biological Control, he worked at Oxford from 1985 to 1987.

He then moved to Imperial College, where he remained until rejoining Oxford in 2006.

From 1999 to 2006 he was director of the Natural Environment Research Council Centre for Population Biology.

Sir Charles is also director of Oxford Martin Programme on the Future of Food where he works on food security.

He said: “I have been very lucky to have been given a big award from the Wellcome Trust to work with a consortium of people from Oxford to explore some of the challenges ahead around consumption of meat and dairy.”

Sir Charles was awarded the Scientific Medal of the Zoological Society of London in 1994 and was elected a Fellow of the Royal Society in 2001.