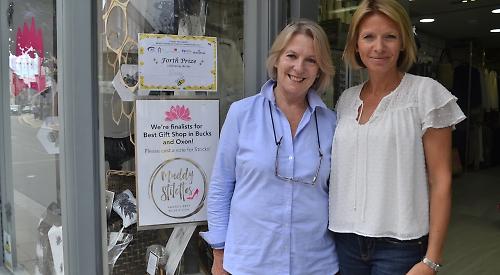 A WOMAN from Henley has won a business award less than two years after she launched her biscuit-making company.

Celia Smith, who runs Bluebell Biscuiterie, was named best local producer of food and drink in the Muddy Stilettos Awards for Oxfordshire and Buckinghamshire.

The awards are decided by public vote and she attracted almost a third of all the online votes in her category.

Mrs Smith runs the business from her home in Peppard Lane, which she shares with husband Paul and daughter Madeline, seven, a pupil at Rupert House School.

Mrs Smith said: “I’m utterly gobsmacked to win this award and have been overwhelmed by the support from customers and friends.

“The final few hours of voting were torture! I stopped watching with 30 minutes to go and then everyone was asking whether we had done it.

“I thought we had but didn’t really want to believe it until the votes had been clarified and the win confirmed by Muddy HQ.”

Mrs Smith makes biscuits which can be individually designed to complement event decorations, table settings, flowers and stationery and can be ordered online or by phone.

She said: “We particularly love weddings and working with brides on ideas for their special day. We also make lots of pretty baby shower, new baby and christening biscuits and biscuits for birthday parties and as corporate gifts.”

The shop, which is run by Sandie Russell and her daughter-in-law Lise Harrow, sells a range of goods including glassware, cushions, greetings cards, picture frames and candles as well as women’s tops and cashmere sweaters for men and women.

Mrs Russell, who lives in Bell Street with her husband Christopher, used to run similar shops in Cambridge but has been working as an interior designer since 2004.

She said: “Obviously we are completely delighted — we didn’t even know we had been nominated! We were told we were in the running by a customer four days before voting closed.

“We have only been open for two months, so to be given second place is just fantastic. It’s a huge accolade just to be nominated.”

Rachel Hughes, of Marmion Road, Henley, founded the Little Welly Goes Wild events, which are held at the Culden Faw Estate, in 2012 and they are now the biggest of their kind in the country.

The Shaun Dickens at the Boathouse restaurant in Station Road, Henley, finished fourth in the restaurant category.

Elizabeth Bespoke, run by Elizabeth Perkins, from Bix, was runner-up in the best florist category and furniture shop Life at Nettlebed was third in the best interiors store award.

In the destination pub category, the new Bottle and Glass in Binfield Heath finished third, one place ahead of the Greyhound in Peppard.

Virgo Beauty, of Goring, and the Goring Grocer came third and fifth in the salon and deli categories respectively.

In the Berkshire awards, Caversham arts and crafts and furniture shop Epoch3 was named best gallery with the Robin’s Nest Gallery in Wargrave in fourth.

Other Caversham businesses to be shortlisted were the Jam Lady, which finished fourth in the local producer of food and drink category, and Siblings Home, which was fifth in the café category

Re-Balance Massage and the Massage Room were second and fourth respectively for the therapy centre award.

The awards celebrate independent local businesses and this year attracted hundreds of thousands of votes in more than 27 categories.

The awards ceremony was held on Thursday last week.