Henley to Paris in a day... by bike 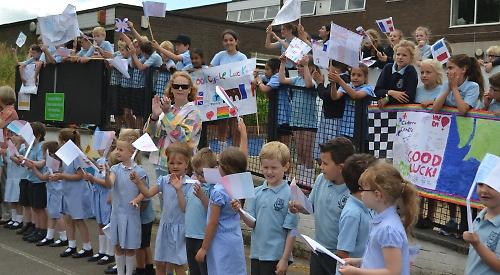 A GROUP of cyclists raised more than £30,000 by cycling to Paris in just over 24 hours.

The 32 riders, who were raising money for Trinity Primary School in Henley and the Chiltern Centre for disabled children, set off from the school on Friday morning and arrived in the French capital the following afternoon.

They included parents from Trinity and other schools in the town, some cycling enthusiasts and a foremr Team GB duathlete, Nicki Aitken.

One rider, Laurence Plant, rode the entire 200 miles on a “fixie”, a single gear bike.

The cyclists, who all wore bright blue jerseys with a rainbow design and the names of sponsors, were cheered off from the school in Vicarage Road by hundreds of pupils and staff. The children waved flags and banners that they had made.

The riders were given a police escort to Wargrave Road and stopped at the St George and Dragon in the village where they split into smaller groups before cycling to Newhaven on the East Sussex coast.

The cyclists stopped every 50km to rehydrate and eat, arriving at the town in the evening to catch a ferry to Dieppe.

They slept on the ferry before getting back on the bikes in France early on Saturday morning. They arrived at the Eiffel Tower in mid-afternoon.

Organiser Tom Potter, a governor of the school, was taking part despite breaking a rib on a practice ride two weeks beforehand.

Mr Potter, of Church Street, Henley, aid: “It was a really special route through some beautiful scenery and quiet roads.

“The French really embrace cycling so cars were hooting and people were shouting ‘Allez!’ and when we got to the Eiffel Tower people were coming up to ask us where we were from and congratulate us.

“I am extremely proud of what we have achieved.

“Not only have we raised a fantastic amount of money for two wonderful local charities that are both under increasing pressure financially, we have rallied the Henley community and local businesses together, made some great new friends along the way and excited and inspired the children, not to mention significantly improved the health and fitness of most of our riders!”

Mr Potter, who lives with his wife Kate and children Kitty, six, Betty, four, who are pupils at the school, and six-month-old Ted, said: “I wanted to raise funds for the school and support a local charity and to make it more of a Henley community initiative.

“I set about asking parents at Trinity and also had a lot of support from Athlete Service and Henley Practice. We ended up with about two-thirds Trinity parents as well as those from other schools and some people who don’t even have children but wanted to get involved.

“Nicki was our sole female rider and probably one of the fittest. She gave a talk at the school and really helped to inspire the children.”

The cyclists caught the Eurostar back the England on Sunday, while their bikes were loaded on to vans and driven back to Henley.

Ms Aitken, from Lower Earley, said: “I spend a lot of time in Henley supporting local charities and I do a lot of competitive sport but this was something different.

“It was a nice to support a lot of the guys who were on their first time cycling on roads. There was a lot of banter and the send-off at Trinity and the final peloton into Paris were amazing.

“I still get tingles thinking about it — the memories will stay with me for a long time.”

Orlando Taylor, of Deanfield Road, Henley, whose daughter Juno, seven, is a pupil, said: “It was one of the most challenging but rewarding things I’ve done in a long time.

It was an epic ride and the France side in particular was amazing. I think we all have the post-ride blues now and want to know what’s next! We’ve all become great mates.”

Headteacher Helen Jones said: “We are so impressed and grateful for this fund-raising effort which will benefit our school and our community. Thank you to all, you have inspired us — truly amazing!”

Liz Deacon, community fund-raiser at the Chiltern Centre, off Greys Road, Henley, said: “These cyclists have given up so much of their time and shown huge commitment over the past few months.

“They have sacrificed family time at weekends and added a whole new pressure into their lives to benefit the children at Trinity Primary School and the families who are supported by the Chiltern Centre. We are extremely grateful for all the efforts and massive fund-
raising they have undertaken which will go a long way to improving the lives of many local families. Special thanks go to Tom Potter, whose amazing idea this was and who has worked so hard to make it happen.” The Mayor said: “I'm so proud of the cyclists from Trinity School, as well as all of the businesses and residents who offered their support and made the event possible.

“This just goes to show how wonderful our community in Henley is, going above and beyond to help each other and our local institutions. Well done to all involved.”

To make a donation, visit www.henley2paris.bike