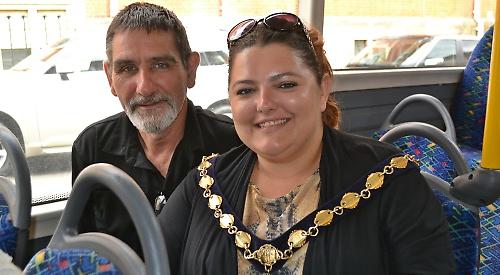 THE Mayor of Henley spent two hours meeting the town’s bus users as part of a campaign to keep services running.

Councillor Kellie Hinton and her escort Councillor David Eggleton rode around on Whites Coaches’ 151 to 154 services, which connect the town centre with outlying areas, to mark national Catch the Bus Week.

They chatted with passengers about why and how often they travel by bus.

The routes were set to be scrapped after Oxfordshire County Council axed all its bus subsidies as part of budgets cuts made last year.

The town council then stepped in with funding on a temporary basis while a new working group tries to find a way for the services to support themselves on a commercial basis.

Councillor Hinton said: “From chatting to people, it’s clear that this is a vital service for people of all ages and for a variety of reasons, whether it’s shopping, commuting or visiting the doctor.

“It was a useful exercise and threw up a number of suggestions that could increase passenger numbers, such as extending the routes to stop at Tesco and Townlands Memorial Hospital or running for more hours.

“There’s a social aspect to this service, especially for the elderly, and real concern about its future because some people would have no other choice but to get taxis, which isn’t sustainable.

“Gary, the driver, is a well-known face and that personal connection is also reassuring for people who have physical or learning disabilities. They feel safe using the service.

“Everything I’ve learned will be fed back to the working group in the hope of making improvements. Henley Town Council is very serious about saving this service.”

Pensioner Maureen Buckland, of War Memorial Place, Henley, who uses the service two or three times a week, said: “This is a very important link and we wouldn’t have anything like it if it went. I worked out that I’m almost a mile from the town centre and that’s a long way to walk for people of my age. There’s no way you could do the return journey with a load of heavy shopping.

“This is a very unsettling time because of the threats to the bus. They need to find a way of keeping it going.”

Richard Hudson, the town council’s transport consultant, has suggested replacing the existing vehicle, which is approaching the end of its useful life, and extending the service to run from 7am to 7pm by 2019. This could bring it into profit by 2023.