Jess when you thought it was a bit hot, Glynne fires up festival 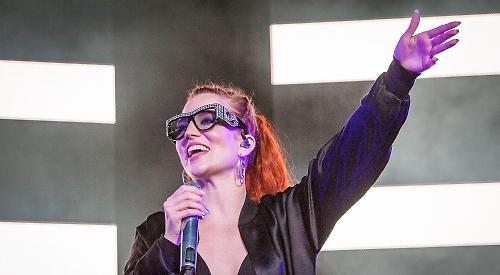 CLAD in black dinner jackets or flowing ball gowns on an evening where temperatures hit the mid-20s, the last thing the punters at the opening night of this year’s Henley Festival wanted to was jump and dance around.

Unfortunately for them, Jess Glynne had other ideas.

The 27-year-old is known for her energetic performances and she was determined that the crowd should join in too.

Demanding that festival-goers got up on their feet from the very first song, Glynne conducted the crowd throughout and made sure they were as much a part of the performance as she was herself.

Despite having been on the scene for just five years, Glynne already has an impressive backlog of hits, including two number ones and collaborations with Tinie Tempah and Clean Bandit.

Add to that an accomplished group of backing singers and musicians, including a brass trio who combined playing their instruments with some sharp dance moves, and you have all the makings of a classic Henley Festival performance.

Glynne might not be the best-known artist to appear at the festival, and indeed on some of the occasions where she asked the audience to sing along there were large contingents who didn’t know the words, but she was still warmly welcomed by the ever-friendly festival crowd.

It was testament to her popularity that when she left the stage at a little after 10pm almost no one left the grandstand, hoping for an encore.

And Glynne didn’t disappoint, re-emerging minutes later for a two-song salvo, including a thrilling finale of perhaps her best-known hit, Don’t Be So Hard on Yourself.

But it wasn’t all high-octane dance moves and lung-busting energy — Glynne had some tender moments too.

Her rendition of My Love was dedicated to her parents, who were somewhere among the thousands of audience members, while the other slower songs prompted festival-goers, and passers-by on boats in the river, to wave their arms, lighters or phone screens in the air.

Glynne left the best to last, leaving the stage to a crescendo of music that allowed her backing musicians to lap up the adulation of the crowd moments before fireworks lit up the sky. A fitting finale.