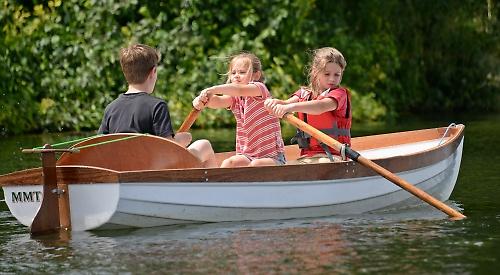 HUNDREDS of people made the most of the hot weather as they took part in the annual Wargrave rag regatta.

Children and families were among those to take part in more than 100 races over 18 categories on the River Thames on Saturday.

They included dinghy, skiff and dongola racing, as well as the popular Bull Enduro kayak race, where adults down half a pint at the Bull in High Street before paddling back down the course.

The event, which is hosted by Wargrave Boating Club, was held off Station Road and saw dozens of people sit on the bank to watch the action in the sun, many bringing rugs and blankets to lie on.

There was also a barbecue run by club members David Askew and Jan Vonka and refreshments for all competitors and spectators.

Organiser Carlton Barnard, who is chairman of the club, said: “It went extremely well, it was a great family fun day. There were more than 100 kids, ranging from four to 16 and for the adult and child sit-in kayak we had 21 races for just the one event. The kids’ dongola was also very popular.”