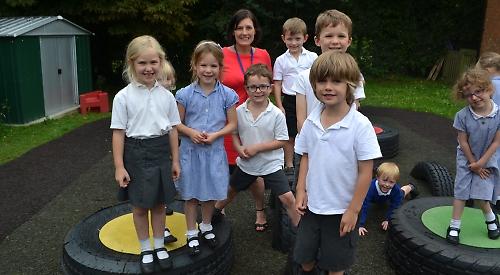 A PLAY area made out of old tyres has been installed at Crazies Hill Primary School.

The £8,500 “tyre park” includes old tyres laid on their side and others cut in half which pupils at the school can jump over and play on.

Mrs Chan said: “Before it would get waterlogged when it rained and the children weren’t able to use it all year round.

“There is a path and a track round the tyre park for bikes so it’s helping us meet the children’s physical needs. It’s already very well used!”

Mr Smith also presented the school with a cheque towards its new outdoor classroom. The school is trying to raise £25,000 to pay for the single-storey classroom.

More than £600 was raised at the residents’ association’s annual barbecue last month, while another £4,000 was made at a comedy night at the Wargrave Village Festival.