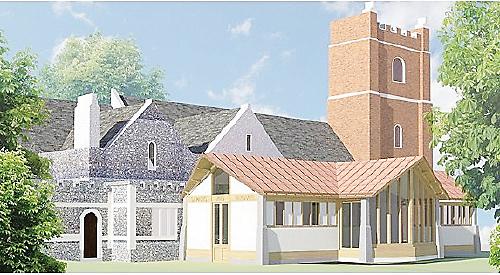 ST MARY’S Church in Wargrave has been tracing the families of people buried in the churchyard before the construction of a new annexe.

The Station Road church has been given planning permission for the £400,000 annexe and plans to build the foundations and outer shell by early next year.

However, it needs to clear an area of the churchyard that includes a yew tree and more than 20 gravestones before the work can begin.

The headstones will be moved next to a boundary wall or to a new memorial garden near the new building.

The church is obliged to try to contact the families of those buried since 1900, which number just four — three dating from the Twenties and one from 1985.

The remaining headstones are older, some dating from the 18th century, and the church doesn’t have to find the descendants.

Peter Mayes, a member of the parochial church council, said three families had been traced, leaving just one — that of Annie Butler from the Twenties.

However, it is likely that the Oxford diocese will allow her headstone to be moved as all efforts have been made to locate her descendants.

Mr Mayes said: “It’s a serious business — you can’t move anything in a church or outside it without the diocese coming into the frame. The restrictions are fairly severe.

“We’ve got permission for the annexe but it’s about respecting the graves there. We are lucky that it’s the oldest part of the churchyard and 90 per cent or more of the graves are historical and we aren’t required to try to find the families.

“One family I’ve been in contact with and two others were found through a genealogy check. The other one has been accepted by the authorities now because we’ve done all the research. We found a Butler line but it wasn’t the right one.”

Following the removal of the gravestones, the concrete foundations of the annexe and a large slab will be laid and the steel skeleton, walls, roof and cladding will be built.

The design has been approved by Wokingham Borough Council and English Heritage.

The annexe will contain two meeting rooms, a café and toilets and will have access to the church via the north porch.

It will provide a meeting place for community groups such as Mill Green Women’s Institute, which currently uses the nearby Hannen Room.

Mr Mayes said: “We had planning permission from the borough council in February last year but it comes with certain conditions and it has taken about 18 months to tick off all of those. Part of that was the question of the graves and archaeology. We had plans to start in July but it could be another month now before we get the official notice back.”

The annexe is the latest stage of the 21st Century Project to modernise the church and make it more appealing and useful to the community.

The church relaunched its project appeal last year and has since raised more than £70,000. Applications have also been made to various trust funds.

The appeal will receive £10 from the sale of each copy of Lost and Found in the Pulpit, the memoirs of former Wargrave vicar Rev John Ratings, who died in December 2014.