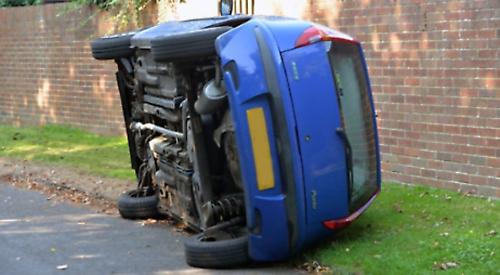 A TEENAGE boy who stole a forklift truck then tipped over a car while armed with a stolen air rifle has escaped a custodial sentence.

The 15-year-old, who cannot be named for legal reasons, was instead sentenced to six days’ community service and ordered to pay £455 following the incident in Sonning Common.

The boy, who lives near Henley, had pleaded guilty to aggravated vehicle taking, careless driving, possession of an unloaded firearm and criminal damage before he appeared at Oxford Youth Court for sentencing on Wednesday. Presiding magistrate Anne Pappenheim said his actions were “extremely serious” but his behaviour had since improved with support from his family and mental health services.

The court heard that the boy was caught on CCTV stealing the £800 vehicle from Oliver Agriculture, a farm machinery dealer in Cane End, at about 7.30pm on September 13 last year,

He had cycled to the site carrying an air rifle which was not loaded. He secured his bicycle to the forklift before driving it towards Sonning Common.

A number of people who saw him called the police. Some had spotted the weapon while others were concerned by his erratic driving.

At one point the front forks were fully down and scraping the tarmac.

During a two-hour rampage, the boy drove to Hazel Gardens at the vehicle’s top speed of 10mph and turned over a blue Fiat Punto belonging to resident William Dormer, who didn’t know anything about it until he was alerted by a neighbour.

The car was written off by Mr Dormer’s insurers so he had to pay an excess of £350.

A police helicopter followed the vehicle, which was also chased by groups of teenagers on mopeds, bicycles and scooters.

At some point the boy ditched it and ran off with the gun, which he dumped before returning home, where he was arrested in front of his father.

When interviewed by police he initially refused to speak but eventually told officers where he had left the rifle.

Angela Porter, in mitigation, told the court: “An awful lot has been done with him since last year and he is getting support from his family, his school and other agencies, including adolescent mental health services.”

His father said: “A lot of time has passed and we’ve seen huge changes in him, thanks largely to the support he receives.

“I think the right professionals are now involved.”

Maddy Charlesworth, prosecuting, said: “This is a serious allegation but I must accept that the charges are approaching a year old and he has stayed out of trouble since then.”

Mrs Pappenheim said: “Because of the enormous amount of cross-agency support you are now receiving and engaging with well, and now that it has been almost a year, we don’t feel custody is the right sentence.”

The youngster was also given a 12-month rehabilitation order requiring him to continue his treatment and ordered to pay Mr Dormer £350 as well as £85 towards prosecution costs and a £20 victim surcharge.