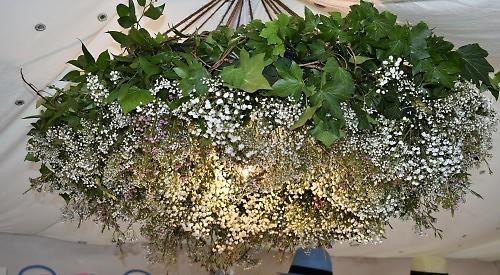 A WOMAN from Kingwood has won two awards for the quality of her work at two prestigious flower shows.

Bernadette O’Farrell, managing director of the Indian Garden Company, was honoured at the Chelsea Flower Show in May and Hampton Court Flower Show in July.

She won two gold three-star awards at the events, which are run by the Royal Horticultural Society.

Traders are expected to decorate their stands with flowers and plants.

Mrs O’Farrell was helped by Erica Cunningham, who runs Brambles florist in Sonning Common, to decorate the trade stands.

She said: “These esteemed awards are reserved for show exhibitors that excel in the presentation of their stand and we are honoured that the Royal Horticultural Society has recognised us. Being honorued twice is a huge achievement.

“I am sure the judges will have enjoyed the many horticultural elements incorporated — all designed by Erica.

“A tailor’s dummy, made from succulents and ivy, was the perfect showcase for our hand-made panama hats from Ecuador.”

Her company, which was founded in 2010, specialises in umbrellas and panamas.