Models to go under hammer 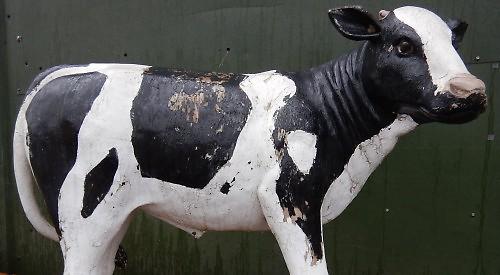 A GARDEN centre near Wargrave is selling its iconic collection of model cattle to help fund renovation.

The five-year dispute cost owner Rob Scott tens of thousands of pounds and a suspended prison sentence but he now wants to expand the site lawfully.

Mr Scott wants to extend the farm shop, re-introduce a fishmonger and create a “cactus world” feature as he is a specialist grower.

Seven models which have been on display for more than a decade will be auctioned tomorrow (Saturday) from 10.30am. The star lot is Bully, a black and white bull. The other models are two cows and three calves as well as a seat in the shape of a cow.

General manager Andy Sherwood, who will conduct the auction, said: “The animals have been with us for about 13 years but it is time for them to be given a new home.

“We are always being asked whether they are for sale, so I have little doubt they will all be bought.

“It will be sad to see them go but that will be tinged with pleasure at the thought of them settling into new homes.

“It’s my debut as an auctioneer, so there’ll probably be some entertainment value in simply watching my efforts.”