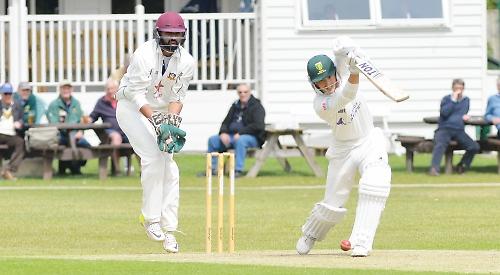 THE captain of Henley Cricket Club says his team got the “little things” right after they sealed the Home Counties Premier Cricket League Division 1 title with two games left to play.

Henley’s victory over Tring Park last Saturday, coupled with a tie between reigning champions Finchampstead and Banbury, means the side have an unassailable 42-point lead ahead of the final two fixtures.

Michael Roberts took over from former captain Bjorn Mordt — who won four titles in 10 years as skipper — in 2015 and led the side to a second-place finish in his first season at the helm.

Ahead of this year’s campaign, batsman Roberts said he was confident Henley could challenge for the title if they cut out the “poor hours” that derailed last season’s campaign.

He now credits the team’s small improvements after finishing as runners-up for two consecutive years.

Roberts said: “We all enjoy playing cricket with each other, be it training or playing at the weekend and it will be great to get our hands on the trophy.

“In 2015 we flattered to deceive a little bit. We went in to the last game with the opportunity to win the league and put in a bad performance but week in, week out we didn’t look after our processes as well as we could have.

“In 2016 we did an awful lot right and were really good for a lot of the season. The credit goes to Finchampstead who were outstanding.

“It’s the week in, week out stuff between the coaches and players, champions are always looking to get better. It’s the balance of professionalism and enjoying cricket.

“The little things have made a difference.”

Roberts added that after the battling victory over Tring he was motivating his side to become champions this weekend when they heard that the tie in Banbury had handed them the title on Twitter. However, he says wrapping up the league won’t change the team’s approach.

He said: “We were really focused on our game. We had a proper match against Tring and were really engrossed and happy with the performance and how we went about winning.

“Then we heard on Twitter that there was a tie and all of a sudden we were champions. We were in the changing rooms at the time talking about putting in the hard work during the week to sew it up next weekend!

“We’ve got another two games to play. Technically we have won but we are still concentrating on those games and when they are won we can go and celebrate.

“We had a good evening on Saturday but we are not getting carried away. We said at the start of the year that winning the league won’t define our season. We want to play 18 games with the same energy regardless.”

Roberts was keen to stress that the title triumph was a team effort but did have praise for some of his star performers.

“Tahir Afridi has been outstanding and the spin unit worked really well together.

“When someone from the top order got in they were batting through more often than not, someone would go in and get a big score.

“We got in Waqas Hussain over the winter and he’s been a fantastic player for us, scoring more than 500 runs in 11 hits.”

Roberts has promised to give some of the club’s fringe players a chance in the first team for the remaining two games but is refusing to look ahead to next season.

He says it is too early to think about how the team will defend their title and wants to enjoy the moment.

Henley travel to second-bottom Horspath tomorrow before wrapping up their season at home to Slough on Saturday, September 2.

He said: “We are concentrating on our next two games and that’s it. We will be changing our team a little bit and giving some of the guys from the second team a few opportunities.

“We will keep doing what we’ve been doing all year and at the end of the season we will let the dust settle and then think about what we need to do to improve and keep this momentum going forward.”

Henley have now won the title six times since the league started in 2000. High Wycombe still lead the way with the most wins, having seven titles to their name.