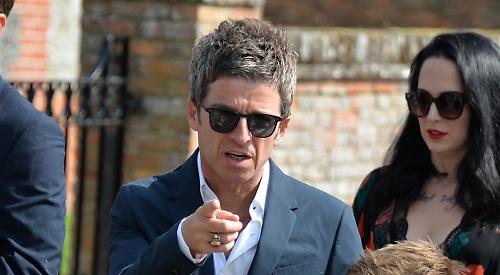 The comedian, 42, who lives near Henley, arrived in a silver Mercedes people carrier with daughter Mabel.

The bride travelled to the church in a white Rolls Royce accompanied by her father Bernard.

About 100 guests attended the service arriving in a fleet of taxis and 4x4s.

The service, which began at 2pm, was led by the Rev Canon Martyn Griffiths, rector of Henley with Remenham, and lasted for about an hour.

A loud cheer could be heard from inside the church before the couple and their daughter emerged to music from the Brass Funkeys and were showered in confetti by their guests.

They then walked the short distance to the riverside, where they boarded the New Orleans, Hobbs of Henley’s mock paddle steamer.

Once all the guests were on board the vessel made the short trip via Hambleden lock to the couple’s home.

Brand was previously married to singer Katy Perry but the couple split in December 2011 after 14 months.