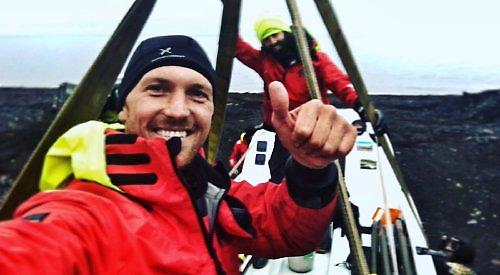 ALEX GREGORY will take no further part in a row across the Arctic Ocean.

The Olympic champion, from Ipsden, was part of a six-man crew attempting to row 2,000km from the island of Svalbard in Norway to Iceland.

He arrived on the tiny island of Jan Mayen on August 19, which is about 370 miles north of Iceland and home to 18 people, but has now decided not to continue onto Iceland.

The 33-year-old said he didn’t want to take anymore “serious risks” and wished to return home to see his three young children – Jasper, Daisy and Jesse – and partner Emily Airey.

Writing on Twitter he said: “This decision has been both an easy one to make and an incredibly difficult one.

“It’s a difficult decision because I’m part of a team, a big team, team Polar Row. For me stopping makes it more difficult for the boat to reach its destination of Iceland.

“But I support the skipper Fiann and am trying to help and facilitate that happening.

“This isn’t easy though. We find ourselves on an island that is incredibly difficult to get on and off. We were lucky to find it and be allowed on, but getting off is nearly impossible unless you’re prepared to stay for months!

“It’s an easy decision because I want to get home to my family. My three young children need their dad, they need him to be responsible and to make the right decisions in life.

“They need him to be brave, adventurous, ambitious and to set them the right example, but they also need him to not take unnecessary risks.

“Where there’s a chance, although slim, that he may not come home, the decision to stop has to be taken.”

Gregory said he didn’t see his decision as a failure, but a success, saying the crew had achieved several world records.

He added: “I’ve been so lucky, so so incredibly lucky, to have achieved what I have here and in previous sporting endeavours. Now what I want is to be with my children and give them some really cool, happy, fun, exciting life experiences and adventures.

“For that I need to be alive. I’m not heading out into rough Arctic waters in a rowing boat again.”

Missing his daughter’s fourth birthday on Friday cemented his decision not to take any more serious risks, he said.

The crew has been on the island for almost 10 days. They decided to head for land because of tough seas and failing power supplies and to recover, recuperate and fix the technical issues.

Gregory praised the hospitality he and his crewmates had received since arriving on Jan Mayen.

“The best meal I have ever eaten awaited me…and these meals have continued for days since,” he said.

“If you ever come across anyone in need, help them. That is what these people have done for us. In reality all we needed, or hoped for, was a dry shed floor but we have been given everything – beds, food, safety, warmth and friendship.”

Replacement rowers are now trying to get to the island to take over from those who don’t wish to continue.

Gregory may have to wait until later this week, when a boat with space for the crew members passes, to leave the island.

The Polar Row team hope to set five world records, including becoming the first crew to row the open waters Arctic Ocean from south to north.

Gregory, who won gold at the 2012 and 2016 Olympics, had joined for the second part of the row. The first part, from Tromso in Norway to Svalbard, ended last month.