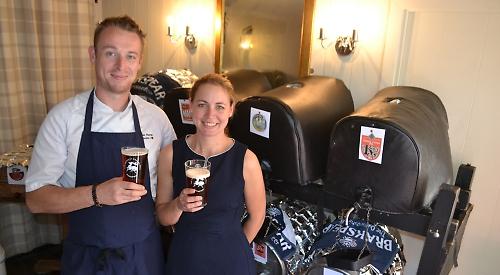 The event at The Horns pub was held on Sunday and bank holiday Monday and benefited from the hot weather.

The pub was selling 12 ales from different breweries including Loddon, Rebellion and Adnams, as well as a guest cider called The Hog Father made by Orchard Pig in Somerset.

There were also Prosecco and gin bars and a barbecue on both days plus children’s games including giant jenga and swingball.

Folk musician Steve Moreno and his band performed on Sunday.

Sandra Purdy, who runs the pub with her husband Adam, said: “It was very successful and well done to everybody getting past the roadworks! Sunday was completely manic but in a nice way. The weather definitely helped with the barbecue in the garden and everything came together quite nicely.

“We had to keep bringing out more pint glasses and there was a lot to wash up. One of the bar staff had their family in who helped bring in the glasses and crockery so thanks to the Trayte family.

“The band played quite a few covers of classics and the customers were highly impressed. We were put in touch with them by Fleur Stevenson, who performed at our first anniversary party  last year.

“We will be doing it again over the August bank holiday next year, although we might need to invest in some plastic pint glasses.”