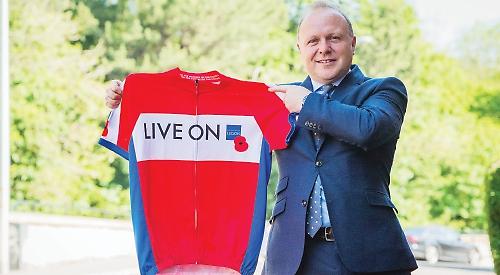 A FUNERAL director from Peppard is attempting to cycle from London to Paris to raise money for the Royal British Legion.

Julian Walker, who runs A B Walker, which has a branch in Reading Road, Henley, began the 300-mile ride yesterday (Thursday) and expects to arrive in the French capital on Sunday.

He is among 300 cyclists taking part in the 22nd annual Pedal to Paris challenge, which started at Eltham Palace in London and finishes by the Arc de Triomphe, where a Remembrance service will be held.

Walker, 48, who only took up cycling a year ago, said: “I have really enjoyed training as the Henley area is such a beautiful place to cycle in. I am grateful for the help and by Rob Griffiths at Athlete Service in Henley.”

Walker, who is the fifth generation of his family to run the business, hopes to raise £3,000 in donations.

He said: “I served as an infantry officer before joining the business so I know the importance of the support offered by the Royal British Legion.”

Claire Rowcliffe, director of fund-raising at the Legion, said: “We are very grateful to Julian for taking on the Pedal to Paris challenge.

“It really is an incredible experience and we wish him all the best for the ride. Apart from the training that goes into preparing for the event, the fund-raising that he is undertaking on behalf of the Legion will help those we support on to a more hopeful future.”

Pedal to Paris began in 1996 to raise money for the Royal British Legion and in that time has made more than
£5 million.

• Solicitor Matt Richardson, 51, of Deanfield Avenue, Henley, is to attempt to ride from London to Paris on a child’s 1972 Raleigh Chopper in four days later this month to raise money for the blood cancer charity Bloodwise. He has raised more than £10,000 for the charity with previous challenges with the bike and set a world record for the longest distance ridden in an hour.