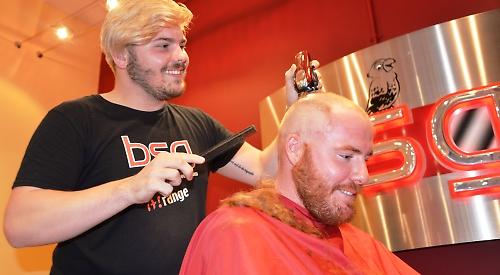 A MAN had his head shaved to raise money for the Sue Ryder hospice in Nettlebed.

Chef Ben Hancock, whose mother Tracey Hancock is the charity’s head of fund-raising, was shorn by Darren Pauluk, a stylist at the Barbershop Group salon in Duke Street, Henley, on Friday.

Mr Pauluk used a pair of clippers set at the lowest possible grade of zero before clipping off any small remnants with a precision tool that shaves as close as a cut-throat razor.

Mr Hancock, 25, of Berkshire Road, Henley, was watched and cheered on by his mother and a group of friends from Harpsden Cricket Club, for whom he plays. He came up with the idea after damaging an Achilles tendon during a game which meant he was unable to take part in this year’s Thames Path Challenge.

Last year, he was part of a team that completed the 62-mile trek from Putney to Henley in just under 18½ hours, raising £2,600 for Sue Ryder and £1,400 for the Alzheimer’s Society.

His efforts this time have so far raised £700 and the salon provided his haircut free of charge. Mr Hancock, who works at the Treetops Nursery in Station Road, said: “My friends dared me to do it and it was something completely different from last year, so I thought, ‘why not?’

“I’ve raised a lot of money, which is the most important thing, but I’m not sure I’ll keep this look even though it would be very low maintenance.

“Some people suggested that I take the beard off as well but I think that would have been a step too far.

“My head feels a lot colder but my beard is keeping my chin warm, so it’s like having an upside-down head! I might need to start putting sun cream on my scalp until it grows back.

“I’m just glad to have supported a very worthwhile charity once again. The Nettlebed hospice has looked after a few of my friends’ parents and the care they provide is second to none.”

And what did his mother think of his new look? Mrs Hancock said: “It’s a pretty mad thing to do but it’s also very brave and I’m extremely proud of Ben. Everyone at the hospice is very grateful for his support.”