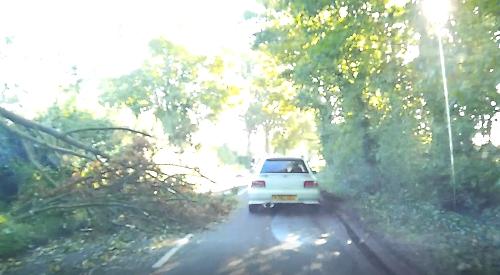 DRIVERS had to take care on the roads this morning (Wednesday) as Henley and the surrounding area woke up to the aftermath of Storm Aileen.

High winds and rain in the early hours brought down a tree in Shiplake Row which blocked the road to drivers heading towards Henley.

They were forced to wait for oncoming traffic to pass before crossing the carriageway and driving round the obstacle.

Branches and debris was also scattered along Wargrave Road in Wargrave but drivers were unimpeded.

In Caversham, scaffolding in Church Road had fallen down, partially blocking the road outside the Griffin Pub.

Police attended to help direct traffic, allowing Reading Borough Council contractors to clear the area. The road was fully open by 8.50am.

Meanwhile, there have been no reported delays to trains on the Henley branch line.

Despite the area remaining largely unaffected by the storm, which brought winds of up to 75mph to the UK, other parts of the country were less fortunate as the first named storm of the year left thousands of homes in the north east and west without power.