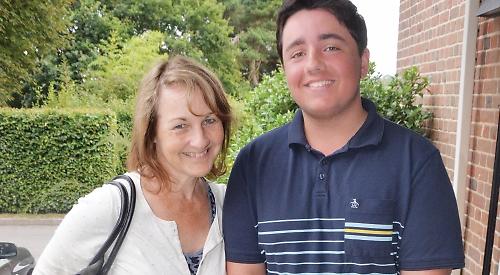 A TEENAGER lost seven stone in seven months because he was worried his weight would damage his health.

Charlie Dart, 18, weighed 19st when he decided to embark on a strict meal plan and exercise regime in January. Now he weighs just over 12st.

His transformation was so dramatic that he needed new clothes and family friends failed to recognise him.

Now he is looking forward to starting university with a new figure, which he says has boosted his confidence.

Charlie, who lives in Backsideans, Wargrave, with his parents Peter, a marketing director, and Annette, a housewife, and sisters Rosie, 20, and Katie, 16, has struggled with his weight since he was a young child.

His problems began when he was six and the family moved from Windsor and he had to change school.

He also struggled with a foot condition which meant he often had to use crutches and was unable to do much exercise.

Charlie, who recently graduated from the Oratory School in Woodcote, said: “I’ve always struggled with my weight and it’s something I’ve always wanted to overcome, especially in my early teens.

“It was the feeling that I wasn’t getting the most out of my childhood and not being able to keep up with everyone else.

“I got into badminton at the Oratory and was representing the first team even with all the weight. It would have been nice if I had gone further and my biggest regret is that I didn’t lose the weight earlier.”

In November he was becoming worried about his weight and how it might affect his health.

Charlie said: “When I was younger my doctors would always say that I needed to get the weight off or it would cause problems like diabates later.

“I thought that this was now the ‘later’ they were talking about. No health problems happened but there was anxiety and I didn’t want that hanging over me for my A-levels.”

Having tried several times before to lose weight, Charlie knew about calories. He worked out his metabolic rate and the number of calories he would burn in a day and then ensured that his diet took in less than that to force his body to use fat reserves instead.

While it didn’t matter what he ate as long as he stuck to his target of 1,200 to 1,400 calories per day, he aimed to eat lots of vegetables and tried to cut out simple carbohydrates like potatoes.

The key was changing his lifestyle so that he didn’t lapse into his old ways after only s few weeks.

Charlie said: “I didn’t want to go into it thinking it was a diet because I had discovered before that they are temporary and you go back to the lifestyle you had before. That sort of lifestyle for me equalled 19st.

“I had to find a way of changing my lifestyle and the Christmas holidays were a big reflection time.”

Charlie boarded at the Oratory and says the structure of the school day was both a help and a hindrance.

He said: “School was very structured so I had to find ways of getting round that and balancing it with my work. It was tough and I did have to make sacrifices, spending lots of evenings on gym work and other things like that.

“The good thing was that at boarding school you have three meals a day and you can’t access the canteen at any other times. I was also doing something to distract me so there were lots of other things on my mind rather than food.

“That means at meal times you want to eat and it helps you avoid snacking at other times.”

Charlie told only a small group of friends about his attempt to lose weight when he began in January.

He said: “They were all very supportive. No one said I wouldn’t be able to do it because of my A-levels. They were excited for me.

“I didn’t tell that many people — I waited for people to notice the weight loss. After about two weeks, when I had lost 10lb, people noticed and said I looked slimmer.

“That was two weeks into a 16-week plan. Most dieters are self-motivated for the first two weeks but after that it comes from other people saying you look slimmer or ‘off-scale’ goals like fitting into some jeans or putting your belt on a different notch.

“I had to hole-punch a few extra notches in my belts and I still wear them now as they make me feel good!” It was during the Lent term that he lost the majority of his weight as he not only watched what he ate but also did more exercise, although this had to be fun rather than monotonous to help him keep going.

Charlie said: “I was swimming a lot more and going to the gym and it was important to know that lifestyle was sustainable and enjoyable.

“I hate running on a treadmill when you are just staring at the wall. I prefer swimming. Exercise has to be enjoyable.

“When I’m older I can still use this plan, especially the swimming. I often swim with elderly people who are able to do lots in the pool.”

Charlie began to ease up on his diet regime in the early summer when he was happy with his weight, trying instead to focus on muscle gain and fuel himself for his A-level exams.

He said: “I needed more mental energy for the exam season. By then I was a healthy weight and with any more loss I would start to look too thin.The exams were great. I got As in music and chemistry and a B in Spanish. I had an unconditional offer for university but I wanted to do well for myself and because my parents had invested a lot of money in school.

“I saw uni as a chance to start again with the body I envisaged, feeling mentally confident with more self-esteem. My parents say I’m still Charlie but I’ve grown a lot and discovered lots about myself.”

While most of Charlie’s regime focused on food, this didn’t mean he missed out on meals out with friends and family.

He said: “Wherever you go there’s things you can do to keep within the plan. For example, if you go to Nando’s with friends have the chicken grilled so it’s healthier than fried and you can add vegetables. You can make anything healthy, you just have to be creative.

“When I went to the canteen at school my rules were always to have no simple carbohydrates. If it was shepherd’s pie, all I had to do was not eat the mashed potato topping and add some salad. It’s keeping your discipline. It is a lifestyle so it has got to be sustainable.” Later this month Charlie starts at Royal Holloway University in London, where he will be studying music and Spanish, and he feels proud of his achievement.

“There have been some cool moments when I think about what I’ve done,” he said.

“I was buying a new suit for school over the Easter as my old one was like a dress on me and I was advised to go to the slim fit section.

“I’ve also had people who I know well walk straight past me, not knowing who I was.

“My mum says it’s worth more than 50 A* grades and I can take all the benefits from this. It has changed my life completely.”