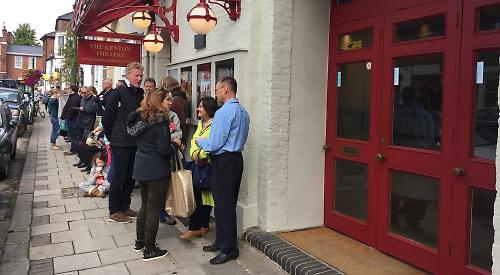 TICKETS for a second performance by stand-up comedian Dara O’Briain at the Kenton Theatre in Henley sold out in an hour.

People began queuing outside the New Street venue at 8.45am on Saturday even though the box office was not open until 10am. At one stage the line reached the junction with Bell Street.

To cope with the demand, temporary sales points were set up in the theatre foyer staffed by box office manager Richard Rule, programming manager Tom Ryan and general manager Paula Price-Davies and her daughter Bethan.

Mr Ryan said: “We found out on the Wednesday that he was up for a second show so with the story in last week’s Henley Standard and an email to our database on Friday afternoon we announced that tickets would go on sale in person at the box office only on Saturday at 10am.

“We sold out in just over an hour and had almost 200 people through the doors, including several first-time customers.”

O’Briain, who is known to millions of viewers as the host of Mock the Week, will be trying out material before a major UK tour next year.