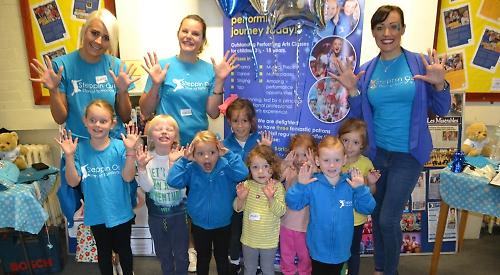 A PERFORMING arts group for children has been launched at the Piggott School in Wargrave.

Steppin Out, which is for youngsters aged three to 17, already has classes in Woodley and Wokingham and will run on Thursdays at the school in Twyford Road.

It offers tuition in drama, singing and dance including street, jazz and tap, as well as other skills including stage combat and television acting.

Previous students have gone on to perform in West End productions of of Billy Elliot, Les Misérables and Matilda, while others have also appeared on television adverts, in theatres around the country and as half-time entertainment at rugby matches.

The first session was held at the school on Thursday, September 14, with about 10 youngsters taking part.

Founder Shelley Otway said: “We already had three big schools, two in Wokingham and one in Woodley, so I was looking for different venues to expand.

“The staff at Piggott were so helpful and I thought it would be a really nice school to start the new business in. I decided to definitely do it just six weeks ago so it’s been quite busy since. The first two weeks have been very successful. Lots of children signed up at the launch and they are starting to tell their friends so it will grow. We have just reached 300 children across all our schools and they will have the opportunity to perform at the Olympic Stadium in March next year.”

Meanwhile, a shopping evening will be held at Robert Piggott Junior School in Wargrave.

The event, which will include pampering sessions such as manicures, massages and facials, will take place at the school in School Hill on Thursday, October 12 from 8pm to 10.30pm.

Clothes and jewellery will be among the items on sale and money raised will be donated to the school’s parents association.

Tickets cost £5 and can be bought from the parents association by visiting www.buytickets.at/robertpiggott
pta while treatments can be booked by emailing the following: chair@robert
piggottpta.org.uk